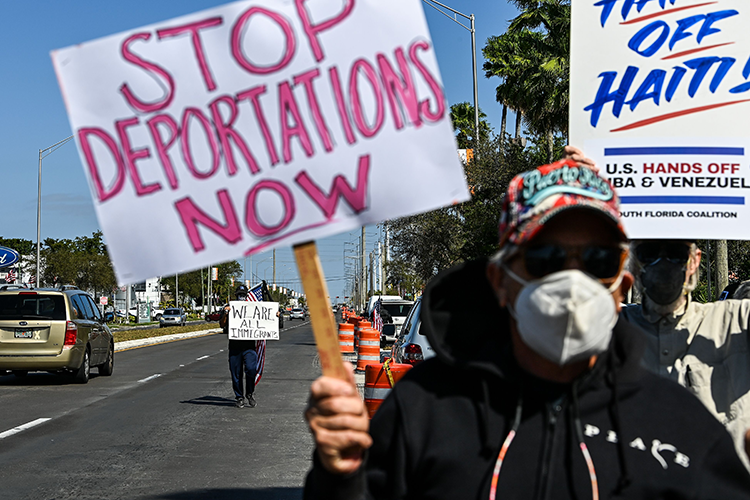 Demonstrators protest in February, asking that the Biden Administration stop deporting Haitian immigrants back to Haiti. (Photo by Chandan Khanna/AFP via Getty Images)

The ABA is offering a new opportunity to members who want to help immigrants who have fled Haiti because of ongoing political strife and devastating natural disasters.

The Commission on Immigration, in partnership with eight other organizations, will sponsor three online pro bono clinics each month to assist Haitian immigrants who are seeking Temporary Protected Status, which will allow them to stay in the United States and apply for work authorization through Feb. 3, 2023.

The Office of New Americans of Miami-Dade, a public-private partnership in Florida that helps immigrants become U.S. citizens, will host the Virtual TPS Clinic on Oct. 21-23 and Nov. 18-20.

Lawyers, paralegals, law students and translators are asked to volunteer for three-hour shifts. According to an ABA press release, no prior immigration experience is necessary. Training will be available to all volunteers, who will assist TPS applicants remotely from their homes or offices.

“Most attorneys will shy away from immigration law because they think it is too complicated and complex,” says Karla McKanders, chair of the Commission on Immigration. “The Temporary Protected Status cases have been screened to facilitate participation, no matter what your area of practice is.”

The commission’s mission is to ensure fair treatment and full due process rights for immigrants, asylum-seekers and refugees within the United States, but that right can’t be realized without access to counsel, says McKanders. She adds that about 155,000 Haitian nationals may be eligible for TPS.

“It is important for the ABA, the largest bar organization in the country, to marshal its resources to provide assistance to Haitians who are experiencing unprecedented political instability with the assassination of their president and the recent earthquake,” says McKanders, the associate director of the Legal Clinic at Vanderbilt Law School.

Haiti’s President Jovenel Moïse was assassinated in his private residence in Port-au-Prince on July 7. The following month, on Aug. 14, a 7.2-magnitude earthquake struck the country, killing thousands of people and destroying tens of thousands of homes and businesses.

Many immigrants from Haiti had already sought protection in the United States after a catastrophic 7.0-magnitude earthquake forced them from their homes in 2010.