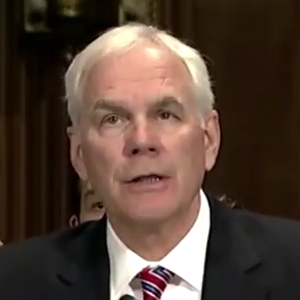 The ABA Standing Committee on the Federal Judiciary has given a “not qualified” rating to a lawyer nominated to a federal judgeship in Oklahoma.

The “not qualified” rating for nominee John O’Connor of Tulsa, Oklahoma, was unanimous, according to an Aug. 21 letter to leaders of the Senate Judiciary Committee signed by Paul Moxley, chair of the ABA standing committee. The Tulsa World and NewsOK (in stories here and here) have coverage.

The standing committee has conducted nonpartisan evaluations of federal judicial nominees since the Eisenhower administration, examining each nominee for their professional competence, integrity and judicial temperament. Dozens of interviews with people familiar with the candidate are conducted, and the committee will look at the candidate’s legal writings, as well. Judicial candidates are rated as “well-qualified,” “qualified” or “not qualified.” The evaluation process and the information shared during interviews are confidential, but the ratings are made public for all official nominees, along with whether the ratings were given by unanimous vote. An in-depth explainer on the committee’s evaluation process can be found here.

According to the letter, O’Connor, who was nominated to hear cases in the Eastern, Northern and Western federal judicial districts of Oklahoma, was found not qualified in the areas of professional competence and integrity.

Professional competence includes such qualities as intellectual capacity, judgment, writing and analytical abilities, knowledge of the law, and breadth of professional experience, the letter explains. “The consensus based on confidential peer review is that Mr. O’Connor lacks sufficient litigation experience, going to the depth and breadth of his law practice to date,” Moxley wrote. “His judgment was also found to be deficient.”

Integrity includes character and general reputation in the legal community as well as industry and diligence. “The confidential peer review revealed several instances of ethical concerns, including candor with the court, evidence of overbilling of clients and billing practices criticized by courts, an improper ex parte communication with a court, and improper contact with adverse parties in litigation,” Moxley wrote.

O’Connor has been in private practice since 1981, according to a questionnaire filed with the Senate Judiciary Committee. He became a partner at Hall Estill in Tulsa this year as a result of a merger with several sections of his former law firm, where he had served as board chair, CEO and president. O’Connor’s practice consists primarily of commercial civil litigation.

O’Connor is the second Oklahoma judicial nominee within the last year found to be unqualified. The ABA standing committee gave that rating last October to Charles Barnes Goodwin, a magistrate judge nominated for the U.S. District Court for the Western District of Oklahoma. The committee said it had concerns about Goodwin’s “work habits, including his frequent absence from the courthouse until mid-afternoon.”

The Senate Judiciary Committee forwarded Goodwin’s nomination to the full Senate in January. Senate Republicans moved to limit debate on Goodwin and 11 other judicial nominees on Wednesday, clearing the way for a vote, Bloomberg News reports.

O’Connor still has the support of Oklahoma’s two Republican senators, James Lankford and Jim Inhofe, according to a press release. “It’s not only disappointing that the ABA has given John O’Connor a poor review, but it is unfair that John was not allowed to respond to their criticism,” Lankford said in the release. He also said O’Connor has “solid legal experience” and is an attorney of the highest competence, honesty and integrity.

The Trump administration has chosen not to involve the standing committee in the pre-nomination process, and the thorough evaluations of each candidate take several weeks. The Senate Judiciary Committee scheduled O’Connor’s nomination hearing to take place on July 11, before the standing committee could complete his evaluation or deliver his rating. However, O’Connor would have been given the opportunity to respond to any negative information the committee uncovered before they completed their process.

While the letter from the standing committee to the Senate Judiciary Committee is the only publicly available information on O’Connor’s evaluation aside from his “not qualified” rating, it is the committee’s policy to conduct a personal interview with each candidate towards the end of their investigation, before the committee votes on a rating.

“During the personal interview, the nominee will be afforded a full opportunity to address and rebut any adverse information or comments disclosed by the evaluator, and to respond to any disciplinary issues,” the committee states in a backgrounder on its process. “If the nominee identifies persons or provides documents or other information that can shed additional light on the adverse comments or on the nominee’s professional qualifications, the evaluator will conduct appropriate follow-up interviews and such further investigation as may be deemed necessary.”