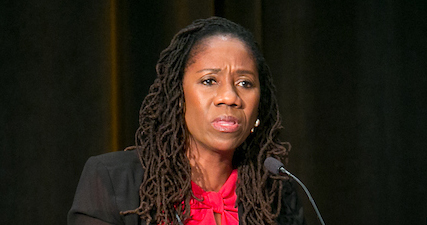 Amtrak has apologized to Sherrilyn Ifill, the president of the NAACP Legal Defense and Educational Fund, after she tweeted that a conductor asked her to give up her train seat for other people who would be boarding.

Ifill was traveling from Washington, D.C., to her Baltimore home Friday in a train with no assigned seats when the conductor approached her, she tweeted Friday. The conductor said she had people getting on at other stops and she wanted to give Ifill’s seat to them, Ifill tweeted. The Washington Post, the Baltimore Sun, the New York Daily News and the Associated Press have coverage.

Ifill says she told the conductor she was getting off at the next stop, and the conductor replied, “Please follow me” to a new seat she had found. Ifill, who is black, says she refused.

When Ifill was discussing the matter with the lead conductor, she thought to herself, “Is it 1950?” Ifill tweeted.

Amtrak told the Baltimore Sun the company apologized to Ifill when it reached her Saturday morning. “We should have responded publicly sooner, and we apologized for the incident and our slow response,” spokesman Jason Abrams told the newspaper in an email. “Amtrak is looking into the matter more closely so that we can prevent situations like this going forward.”