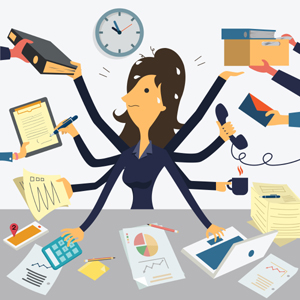 A federal appeals court has ruled that a Williams & Connolly staff member wasn’t entitled to collect disability insurance for anxiety, depression and post-traumatic stress disorder that she largely blamed on her work environment.

The 6th U.S. Circuit Court of Appeals at Cincinnati ruled against Lisa Holden, who was the deputy director of finance at Williams & Connolly before she left in 2015, report Reuters, Bloomberg Law and Law360.

She had worked at the law firm, starting out in a lesser position, since 1997.

The court ruled that Holden couldn’t collect because the chronic stress that stemmed from her work at Williams & Connolly didn’t prevent her from working elsewhere in the same occupation.

Holden had been in charge of all tax reporting for the firm and oversaw six pension plans, financial reporting and accounts payable, according to the 6th Circuit’s July 8 opinion.

Holden said the accounting department was understaffed, resulting in an excessive workload. Beyond that, she said, she also experienced bullying, abuse and harassment, including sexual harassment.

When she first spoke with the insurer, Unum Life Insurance Company of America, Holden reported anxiety, tearfulness, nightmares, tremors, an inability to focus, insomnia, fatigue, social withdrawal, a sense of impending doom and poor appetite. She said she thought her problems were primarily due to her work situation.

Holden sued for benefits under the Employee Retirement Income Security Act. Unum Life Insurance Company of America’s long-term disability plan gave the company the discretion to interpret its plan, and denials are evaluated by courts under an arbitrary and capricious standard, the appeals court said.

The appeals court said Unum Life Insurance Company of America’s decision was not arbitrary or capricious.

Unum Life Insurance Company of America’s plan defines a disability as being limited from performing the material and substantial duties of the insured’s “regular occupation.” The insurer’s experts relied on objective evidence in finding that Holden could perform her job at an employer other than Williams & Connolly, the appeals court said.

“At bottom, the record is replete with evidence that Holden’s disability arose from conditions inextricably intertwined with Williams & Connolly,” the 6th Circuit said.

The author of the unpublished opinion is Judge Bernice Bouie Donald, a former member of the ABA Journal Board of Editors.

Holden had also filed a pro se lawsuit against Williams & Connolly, but she dropped the case this year. Her motion to dismiss said she filed the case too late, and she wanted to “get on with her life,” according to Reuters.

Updated July 9 at 10:15 a.m. to include information on Holden’s suit against Williams & Connolly and the law firm’s statement.