Last week, footage of a U.S. Supreme Court hearing was posted on YouTube. This week, U.S. Supreme Court reporter Mark Walsh, writing for SCOTUSblog, noticed some “security tweaks” to Supreme Court security procedures. He writes that court observers have speculated that the videos were made with something as small as a pen camera that slipped through security.

At the court’s second security check, the tables at which police officers examine personal effects are now covered with white tablecloths and are more brightly lit, Walsh wrote. “Many visitors, including reporters who regularly must pass through the checkpoint, were required to extend or remove their belts for inspection. A sign prominently displayed at the checkpoint reminds visitors that cameras and recording devices are not allowed in the courtroom.”

And the standard security announcement inside the courtroom has changed. “The announcement, which typically discusses the need to remain quiet and where spectators should exit, on Monday encouraged spectators to ‘discreetly’ alert security personnel ‘if you see anything suspicious.’ “

Walsh said that the court’s public information office declined to comment to him on the changes, saying it doesn’t discuss security procedures. 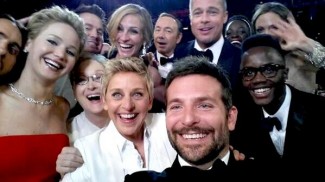 About the ‘Oscar selfie’

“There are thou­sands of inter­est­ing copy­right issues, and trust me, ‘who owns the copy­right in the Oscar selfie?’ is not one of them,” Arent Fox partner Paul Fakler wrote at Title 17: The S(c)ite For Copyright Law. “But there has been so much awful ‘analy­sis’ by noncopyright lawyers hold­ing them­selves out as copy­right experts that I can­not help myself.”

Fakler says that it’s quite possible that no one owns it, and while he’s read assertions that Ellen DeGeneres owns the copyright because it was her idea (Oscars sponsor Samsung denied that it had directed that the selfie to be taken in a statement reported by Today), or because she owns it as a work-for-hire since Bradley Cooper took the photo. The latter is the silliest analysis that he’s seen so far, he wrote.

“First, pho­tographs are not among the types of works that can pos­si­bly be a work for hire when cre­ated by a nonemployee (unless they are com­mis­sioned as con­tri­bu­tions to col­lec­tive works, which is not the case here). Sec­ond, as far as I have read, there was no writ­ten work-for-hire agree­ment.”

Rebecca Tushnet’s 43(B)log noted Fakler’s post and applauded it. But the Georgetown University law professor notes “that there is a ‘teacher exception’ to the WFH doctrine, and that has no statutory basis either; but since it operates in the opposite direction than these arguments by preventing WFH status rather than conferring it, and since it favors me, I don’t think that’s a big problem.”

At China Law Blog, Harris & Moure lawyer Dan Harris noted that a “fully qualified Chinese attorney” working as a paralegal for his firm was working on a paralegal certificate rather than an LLM. Why? She knew many other Chinese attorneys who had pursued LLMs hoping to find legal jobs in the U.S., and none had.

It used to be that foreign law graduates would get LLMs in the United States and return to work in their native countries. “But maybe around ten years ago, there was a large influx of China attorneys seeking US LLMs with the idea of securing jobs in the United States. US law schools—who make small fortunes off each foreign LLM—generally do nothing to dissuade these students from coming. And so they keep coming with the hope of American lawyer jobs that seem pretty unattainable.”

Get it together, National Archives

Law professor and blogger Josh Blackman recently visited the National Archives in Washington, D.C., in honor of President’s Day and lingered over the glass cases containing the original copy of the U.S. Constitution.

“My eyes slowly panned across my favorite provisions—Article I limiting the powers of Congress, Article III creating the Supreme Court, and Article VI stating that the Constitution is the ‘Supreme Law of the Land,’ he wrote. “But, my immersion in our Charter of Liberty was abruptly interrupted. A guard told me to keep walking: ‘Please do not read the entire Constitution. If you want to read the entire document, please visit the gift shop.’ “

A line had formed, and he was recognizing that the guard was moving visitors along. “But the thought that a guard would have the gall to tell visitors to our Nation’s capital to not read our Constitution is appalling. By the way, all federal employees draw a salary by virtue of the Constitution’s ‘Appropriations Clause’ found in Article I, Section 9, in case he allowed anyone to read that far.”

Adding insult to injury, when he went to the gift shop and looked at an item under a sign reading “The Declaration of Independence in a Bottle,” he saw that the document in the bottle was actually the U.S. Constitution. “That the National Archives made such a mistake is stunning.”