Around the Blawgosphere: 'Eastwooding' in Litigation; In Defense of Strunk & White

Arguing with an Empty Chair in Court

Since actor Clint Eastwood’s speech last week at the Republican National Convention in which he talked to an imaginary President Barack Obama in an empty chair on stage, many Internet memes have been born, and the expression “Eastwooding”—to denote the act of arguing with an empty chair—was born, litigation consultant Ken Broda-Bahm writes at Persuasive Litigator.

“Of course, in the courts, trial attorneys have been Eastwooding—blaming empty chairs—for many years,” Broda-Bahm wrote. In tort cases in which a party not actually on trial is somehow immune or settled out of court, a defendant on trial has a strong incentive to argue during trial that these “phantom defendants” should shoulder all the blame.

Broda-Bahm notes some of the challenges and proposes some solutions for when you need to get the jury to blame an empty chair. For instance, jurors might struggle to evaluate a party that isn’t around to defend itself. A solution? Be sure to “present the facts in such a way that jurors feel they know what the empty chair would say if it had a representative in court.”

Broda-Bahm also expresses this desire: “Personally, I’m hoping that the term ‘Eastwooding’ catches on in a legal context, as in ‘Wow, did you see how much Eastwooding she was doing in opening statement?’ But even if it doesn’t, defendants who point to an empty chair in trial can take an important lesson from the actor: What seems like a good idea at the time can always fail in the execution.”

Don’t Read Into It Too Much

At LawProse, Black’s Law Dictionary editor-in-chief Bryan A. Garner addresses “linguistic malcontents” who harbor a lot of resentment for The Elements of Style by William Strunk, Jr. and E. B. White. Garner thinks that many people take it too literally.

“It’s a primer—an excellent but extremely elementary book,” Garner writes. “Part of the negative attention it gets is based on the way some people improperly treat it as if it were scripture.”

Some of its critics, however, argue that the book was written to suggest that its “simplistic don’t-do-this, don’t-write-that instructions” are rules rather than recommendations and does not acknowledge that there are different ways to write something well—and English teachers may seize on this.

“But Strunk & White can hardly be blamed for the misguided methods of well-meaning English teachers, who may believe that students need a grounding in style before exploring alternatives,” Garner counters. “With any craft, it’s good to learn the rules before experimenting with breaking them.” 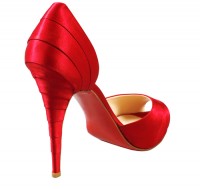 On Wednesday, the New York City-based 2nd U.S. Circuit Court of Appeals ruled that Christian Louboutin is entitled to trademark protection for red soles on the bottom of women’s high heels, except when a red sole matches a red upper. A victory, right?

But Fox Rothschild partner Staci Riordan writes at Fashion Law Blog that “if I were Louboutin, I would still be seeing red.”

Even if Louboutin won, Yves Saint Laurent didn’t exactly lose. It still gets to make its monochromatic red shoes. And Louboutin’s trademark is narrowed.

Both Riordan and Rebecca Tushnet’s 43(B)log mentioned a footnote stating that “the more appropriate vehicle for the protection of the Red Sole Mark would have been copyright rather than trademark.” Tushnet, a Georgetown University law professor, thought the assertion was ridiculous.

“The idea that a color or even a color contrast could make a utilitarian article copyrightable (because that’s what has to be contemplated in order to make this aside relevant—not the shape of the shoe or the shape of the sole, though claims to those would be wrong too) is nuttier than anything the district court or either of the parties claimed. I trust that Louboutin won’t burden the copyright office with rejecting an attempt to register a work that consists of the red sole of a shoe, contrasting or not.”