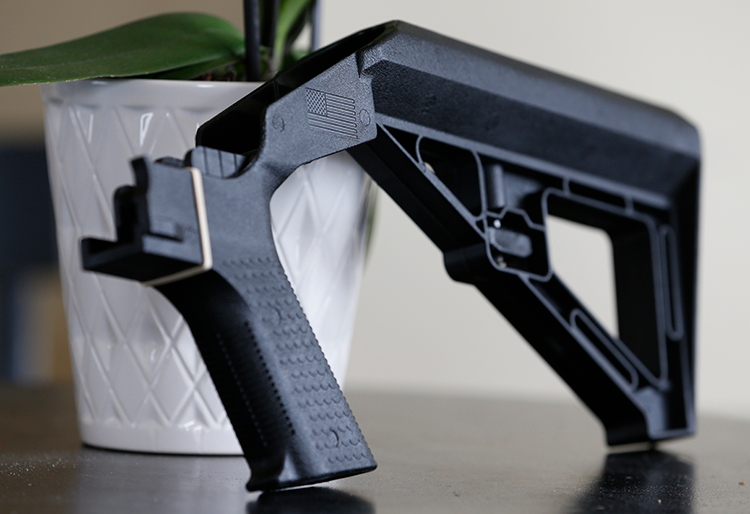 Bump stocks like the one pictured increase the rate of fire on semi-automatic weapons. (AP Photo/Steve Helber, File)

A federal government regulation that bans bump stocks—which are used to accelerate gunfire on semi-automatic weapons—is back in force as a result of a split decision Friday by an en banc federal appeals court.

The Cincinnati-based 6th U.S. Circuit Court of Appeals split 8-8 in its Dec. 3 ruling, which had the effect of upholding a federal judge’s decision in favor of a government rule that outlawed the devices. Courthouse News Service, Bloomberg Law, the Hill and the Volokh Conspiracy have coverage.

The rule by the Bureau of Alcohol, Tobacco, Firearms and Explosives determined that bump-stock devices fall within the definition of “machine guns” that are banned by federal law.

The federal definition says a machine gun means any weapon that fires “automatically more than one shot, without manual reloading, by a single function of the trigger.”

The ATF adopted the rule after Las Vegas gunman Stephen Paddock used a gun with a bump stock to kill 58 people at a country music festival in October 2017.

Judges on the 6th Circuit panel differed over whether bump stocks constitute machine guns and whether the government interpretation is entitled to Chevron deference—even when the law being interpreted has criminal applications.

Chevron deference gets its name from the 1984 case Chevron USA Inc. v. Natural Resources Defense Council. The principle says federal courts should defer to agency interpretations of the statutes that they enforce.