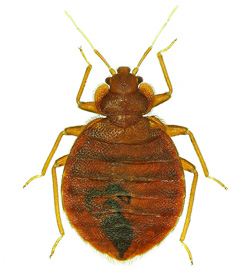 A courthouse in Claremore, Oklahoma, was evacuated and closed Monday after bedbugs were discovered on a lawyer’s jacket.

Rogers County Sheriff Scott Walton gave the details to the Tulsa World and News on 6.

Someone noticed something crawling on the neck of a lawyer in a third-floor courtroom during a morning docket call, Walton said. The lawyer “laid his coat over some files. When his coat was moved, bedbugs fell out of it,” Walton told the Tulsa World.

The lawyer, who was not identified, visits the courthouse about once per month, Walton said.

The courthouse reopened Tuesday morning, according to the Tulsa World and Fox 23. Powder and spray were used to kill any insects.

A county commissioner, Steve Hendrix, told the Tulsa World the presence of bedbugs was not actually confirmed. But the courthouse was closed to allow for treatment of possible contamination.