Big Apple may join Chicago in banning bicyclists from texting 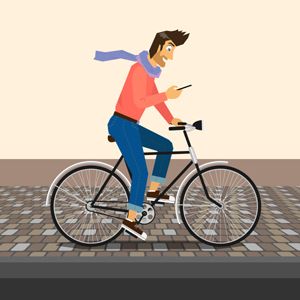 Like many other jurisdictions, New York state prohibits motorists from talking, texting or sending an email from a handheld cellphone while driving.

But the ban doesn’t apply to bicyclists. That may soon change: On Thursday, Mark Treyger, a Democratic city councilman from Brooklyn, plans to propose a similar law in New York City, the New York Daily News reports.

The New York City proposal would allow a first offender to avoid a $50 ticket by taking a bicycle-safety course, but repeat offenders could be fined as much as $200.