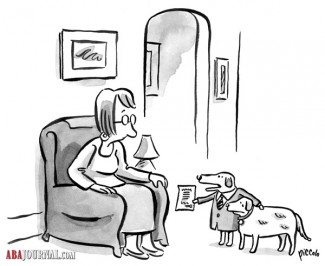 ABA Journal staffers snubbed the dog-eat-dog puns, even though clever “pro bone-o” and “illegal collar” captions made us snicker. But after reviewing more than 150 submissions, these were the three stand-out favorites.

Now it’s your turn to tell us which one should run with the cartoon in an upcoming issue of the magazine:

• “He lied. The kid lied. Here it is, not a mark on it.”—submitted by Elizabeth Schenck of Syracuse, New York

• “You’ve got 10 days to take down the Facebook photos.”—submitted by Jon & Kristin Peri of Media Pennsylvania

• “OK, you wanted to do it the hard way, so here’s the warrant. Now, for the last time, where’s the ball?”—submitted by Eric Singer of Lisle, Illinois

Next:
Judge bans live tweets by opposing counsel during deposition