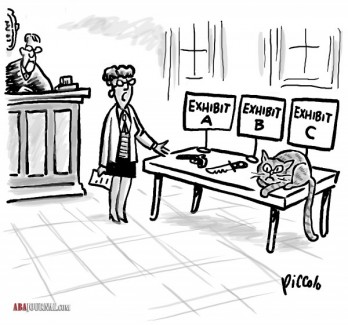 After narrowing down the cartoon contest entry list, these are the three staff picks. Now it’s your turn to vote for the winning caption that will appear in an upcoming issue of the magazine.

ABA Journal staffers have sifted through more than 100 entries for this months feline-themed cartoon. Now it’s your turn to pick a favorite.

Vote in the cartoon poll for one of the below captions before Monday, Oct. 26:

• “After the defense’s motion in limine was denied, the cat was out of the bag.”—submitted by Conrad Connealy of Kearney, Nebraska

• “First, she shot my client; then she stabbed my client; then, to complete the humiliation, she had her cat show utter indifference to my client.” —submitted by Douglas D. Walsh of Olympia, Washington