Cartoon of the Month 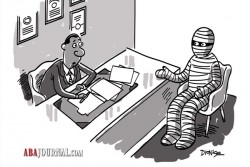 ABA Journal staffers have sifted through more than 200 entries in this month’s cartoon caption contest to select a top three. Now it’s your turn to pick the best. See the full post and cartoon here.

ABA Journal staffers have sifted through more than 200 entries in this month’s cartoon caption contest to select these top three. Now it’s your turn to pick the best.

• “Well, of course I was involved in a pyramid scheme.” —submitted by Bruce Rand of Woodstock, Georgia

• “I’ve been getting complaints from the other lawyers. I think you need to unwind a little.” —submitted by Nicholas Maiorano of Newburgh, New York

• “Do you think it is too late to change my estate plan?” —submitted by Pamela L. Eaton of Burlington, Vermont