Updated: After being placed on probation, losing federal student loans and enduring months of speculation, the teach-out plan that Charlotte School of Law submitted to the council of the ABA’s Section of Legal Education and Admissions to the Bar has been rejected.

A spokesperson from the office told the ABA Journal on Tuesday that if the law school did not shut down, the agency would take action to ensure that it did. The communication also states that it notified the Department Education about its position.

“Many of the students recently enrolled at Charlotte School of Law now have rights under federal regulations that will help them with their student loans,” Josh Stein, the North Carolina attorney general, said in a statement. “Under the closed school discharge rule, students who were recently enrolled are entitled to complete loan forgiveness.” The office had opened a civil fraud investigation against the law school in April.

Charlotte School of Law Alumni Association President R. Lee Robertson Jr. wrote in a Tuesday email to members that the law school was closed, and that the school had taken down its website.

Charlotte School of Law President Chidi Ogene and interim dean Paul Meggett told students in an email Tuesday that the school intends to comply with state law, and taking down the website was part of their effort to do that.

“Further, to ensure that CSL does not inadvertently run afoul of North Carolina law, we have taken down the school’s website to avoid any perception that we may be engaged in unauthorized conduct,” the email reads. “Your best interests remain our primary concern, and we will send any necessary updates as they’re available.”

Liz Hill, press secretary at the U.S. Department of Education, told the ABA Journal on Tuesday that the agency had not received closure notification from Charlotte School of Law.

WBTV and the Charlotte Observer had coverage.

The law school did not respond to media requests for comment, including those from the ABA Journal.

Robertson wrote in his Tuesday email that the University of North Carolina Board of Governors, which handles state authorization and licensure for nonpublic, post-secondary degree-granting institutions, declined the law school’s request for a deadline extension.

The board in June gave Charlotte School of Law until Aug. 10 to submit an ABA-approved teach-out or remedial plan. Other conditions for state licensure included the law school admitting no new students and obtaining a tuition guaranty bond of at least equal amount to the prepaid tuition from students who may participate in the proposed teach-out plan. On Aug. 11, the law school announced that it had asked for a deadline extension. 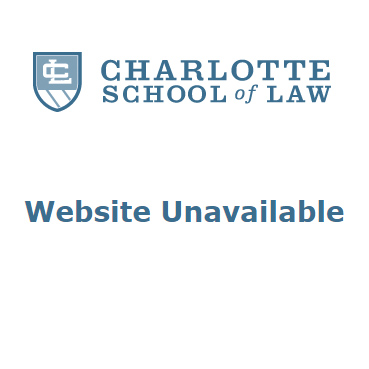 “It appears that there is no path forward,” Robertson wrote in the email. “Our law school, it seems, is closing, effective immediately. (The website was even removed late last night).”

The council finding, released Tuesday, mentions a March letter (PDF) stating that a proposed teach-out agreement for the law school was deferred. That followed the the school informing the council about a Department of Education letter that appeared to indicate that the law school would have access to some federal loan disbursements for certain students.

“After due consideration of the record in the matter, the council, without dissent, rejected the law school’s teach-out plan,” the Aug. 14 letter (PDF) states. “The teach-out plan assumed that the law school would continue to operate as a degree-granting institution.”

In October, the council issued a decision (PDF) to place the school on probation. Two months later, the U.S. Department of Education announced the school would lose its federal student aid after finding it made “substantial misrepresentations” to current and prospective students regarding its compliance with ABA accreditation standards.

Over the past year, Charlotte School of Law has made several statements that student loan funds would be released. In May, the second disbursement of direct loan funds was released, reportedly only to students with fall-spring packages. At the end of July, the school announced that the Department of Education was “prepared to reinstate the school’s ability to award” federal student loan money under the Title IV program.

When contacted in July by the ABA Journal, a spokesperson for the Department of Education said discussions were ongoing. The agency’s requirements were outlined in a July 27 letter (PDF).

“Until the discussions reach a successful conclusion, CSL will remain ineligible to participate in the Title IV programs,” the spokesperson said. The department did not immediately respond to an inquiry Friday regarding a deadline extension.

In its August letter on the teach-out plan, it notes that the section’s accreditation committee reviewed Charlotte School of Law’s reliable plan, which had goals including restructuring curriculum and bar preparation programs, and projected increases in LSAT scores for entering classes. In July, the committee notified the law school that it did not find the reliable plan submitted “to be reliable,” the letter states.

“The law school is reminded that based on prior action of the accreditation committee, it has until Feb. 3, 2018 to demonstrate that it has come back into compliance with the standards,” Barry Currier, the ABA’s managing director of accreditation and legal education, wrote in the teach-out finding. “If not, as the law school has been previously told, the (U.S. Department of Education) rules require the council to take immediate adverse action to remove the law school’s accreditation.”

Andrew Howe, who is attending Charlotte School of Law on a full-ride scholarship, told the ABA Journal that to his knowledge, the school had not notified students of the recent development.

“Which I find to be egregious,” he wrote in an email. “As for the general situation, I am numb at this point. I would say CSL’s handling of this situation is ‘par for the course.’ I really, really want to be an attorney, but it appears that option has quickly [been] foreclosed.”

Updated at 3:13 p.m. to include comment from the Department of Education. Updated on Aug. 16 to clarify accreditation committee recommendation. Last updated Aug. 17 to include information from Aug. 16 story.