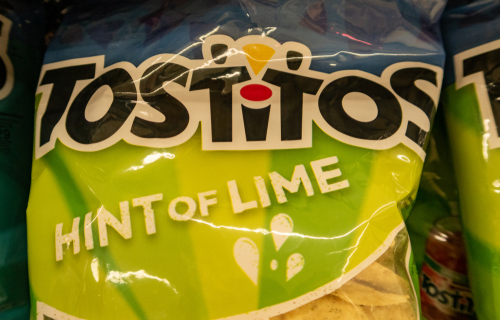 A federal lawsuit filed last month against Frito-Lay North America Inc. has alleged that the maker of the corn chips, potato chips and other snack foods misleads consumers by touting a “Hint of Lime” in Tostitos chips that apparently contain only a “negligible amount of lime.”

In reality, lime is only a “de minimis or a trace amount” of the “natural flavors” listed on the ingredients list, the suit said. Otherwise, the label would state “lime juice” instead of “natural flavors.”

The suit pointed to packaging clues that allegedly mislead consumers.

“Hint of Lime” is written on the front of the Tostitos package on a transparent cutout of a lime wedge with several drops of lime juice pictured.

The package also includes the statement, “Here’s Another Hint—Squeeze in More Flavor With Some Salsa,” leading to the impression that the product contains squeezed lime ingredients, according to the suit.

On the bottom of the package is a disclaimer that reads: “Flavored Tortilla Chips.”

“Reasonable consumers will not know that ‘Flavored Tortilla Chips’ is an implicit admission that the product does not contain a ‘Hint of Lime’ but a de minimis amount of lime,” the suit said.

In addition, the disclaimer may not be visible because it is on the bottom of the package, where it can’t be seen when the weight of the chips causes the package to crumple over slightly at the bottom.

“Natural flavors” on the ingredients list means that the product has flavor compounds that imitate the taste provided by limes. “Natural flavors” is a term used “where a mix of extractives and essences from various fruits, along with additives and solvents, are combined in a laboratory,” the suit said.

The natural flavors reference “fails to tell consumers that the product’s taste is not only from limes and has a negligible amount of lime,” the suit said.

The plaintiffs are represented by Spencer Sheehan of Sheehan & Associates of Great Neck, New York.

A spokesperson from Frito-Lay did not immediately respond to an ABA Journal email requesting comment.