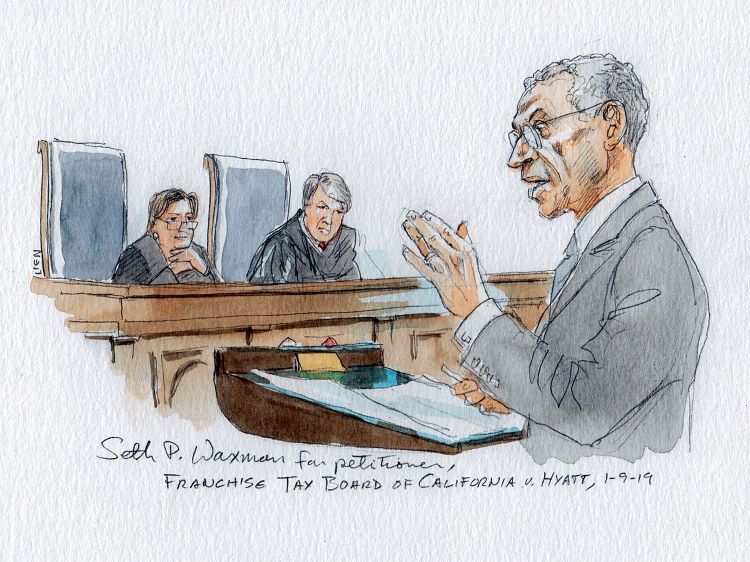 In this sketch by artist Art Lien, Seth P. Waxman presents oral arguments before the U.S. Supreme Court in the case Franchise Tax Board of California v. Hyatt. In the background, Justices Elena Kagan and Brett Kavanaugh look on. Sketch by Art Lien, CC-BY-SA-4.0, via Wikimedia Commons.

It was Lien’s realization when he stayed home during the pandemic that he really hated the commute, Law.com reports. He sketched the Supreme Court from home using photos of the lawyers’ arguments that they provided to him.

Lien spoke with Law.com about his career, which began in 1976 at a local TV station and ended at SCOTUSblog.

After sketching for the local station, Lien found work as a freelancer with CBS and then as a contract artist for NBC. His most difficult assignment was covering the trial of Timothy McVeigh in the 1995 bombing of the Alfred P. Murrah Federal Building in Oklahoma City.

Sketching the Supreme Court was difficult, Lien told Law.com, because his view of the courtroom wasn’t good from the press section in an alcove. Things improved when he joined SCOTUSblog because Lien sketched every argument. He found that on “the quieter cases,” he could take his time and have fun. 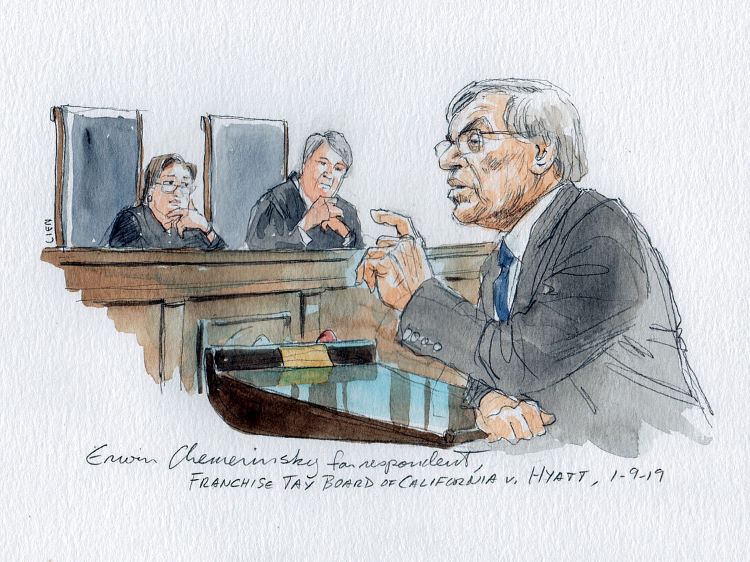 In this sketch by Lien, law dean Erwin Chemerinsky presents oral arguments before the Supreme Court in Franchise Tax Board of California v. Hyatt. Kagan and Kavanaugh look on. Sketch by Art Lien, CC-BY-SA-4.0, via Wikimedia Commons.

Here are some excerpts from the Q&A interview:

• On finding his first job after graduating from the Maryland Institute College of Art: “I didn’t know what I was going to do when I graduated. I remember sitting in bed crying because I didn’t know what to do with my life. I was painting roofs and houses. But along came our governor—Marvin Mandel was going on trial. I saw a job posted at MICA—a local TV station was looking for a sketch artist. I went to the newsroom and sketched the people in the newsroom, and they hired me.”

• On his subsequent firing: “I went to my first pretrial hearing and did such a bad job, the station fired me. The materials I was using weren’t good for the courtroom. I had nonabsorbent paper and was using water colors and every time I moved, the colors would run. I switched to absorbent paper and showed them more sketches, and they hired me back. Don’t give up.”

• On his favorite justices to sketch: “Right now, I have a very easy time with Justice Sonia Sotomayor. I like her hair. I like her earrings. I like her bracelets, and she used to be the first to come in on the argument. [Newly retired] Justice Stephen Breyer is a tremendous amount of fun because of his body language and he asks very long questions, and you have time to draw him. I always found Justice Anthony Kennedy was very easy for me to do.”