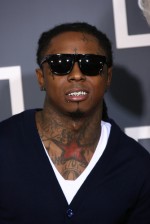 In what TMZ dubbed possibly “the most entertaining legal proceeding” ever, the rap world was introduced to lawyer Pete Ross, whose current claim to fame is being the calm off-camera voice in a deposition of Lil Wayne.

Videos from the June deposition were posted by the celebrity news site this week and quickly went viral.

While Complex Music magazine homed in on what appears to be a thinly veiled threat:

Ross: You have to wait until the end of the question.
Wayne: I don’t have to wait until the end of anything. This guy right here [motions to his own lawyer] may tell me I have to wait, but I don’t have to do nothing.
Judge: Go ahead and answer the question.
Ross: Thank you, your honor. Do you like to—
Wayne: You know he can’t save you, right? In the real world. That guy right there. He can’t save you in the real world. Just so you know.
Ross: And what does that mean?
Wayne: I don’t have to elaborate.
Ross: Is that a threat against me?
Wayne: [Smiling.] No, it’s not.

Complex Music reached out to Ross, of L.A.’s Browne George Ross, who told the magazine, “I cannot comment about this case, which is scheduled to go to trial on October 9. We are, however, looking forward to presenting our claims to a jury.”

The underlying case involves a suit brought by Wayne against Quincy Jones III in a dispute over a documentary Jones produced about Wayne.