Does Stanley have a mustache? 'The Office' illustrates issues with cross-racial identification

As I’ve been writing this column on law and pop culture over the past year or so, I’ve started to realize that my wife has a helluva legal mind. She just gets it. She’s not educated in the law (she has a masters in nonprofit management), but she’s pretty spot-on.

Case in point: we’re currently somewhere between our 10th and 15th binge of The Office—all nine seasons. We don’t necessarily watch every episode from start to finish (anymore), but because it’s comforting, familiar, and funny as hell, it has become somewhat of a go-to. She likes to fall asleep to the television, and I’ve seen every episode so many times that it becomes white noise if that’s what I need at the moment.

As we were lying in bed recently, episode 20 of season 8 began. Those familiar with The Office are aware that each episode starts off with a comedic short of sorts. Many times the first 2-3 minutes or so do not have much, if anything to do with the rest of that show’s storyline.

The episode starts off with the announcement that Stanley Hudson is returning that day from his recent tonsillectomy, and the rest of his co-workers have been nice enough to get him a card to commemorate. There’s one problem though: the card reads, “Glad they didn’t mix up your tonsillectomy with a mustachectomy!”

Jim Halpert, a white co-worker, has issues with the card; he doesn’t think Stanley has a mustache. He polls the office, and there is a split as to those who do and do not believe Stanley sports a lip line. Pam (another white co-worker and the office artist), goes so far as to draw two separate caricatures of Stanley from memory to give the others a visual. 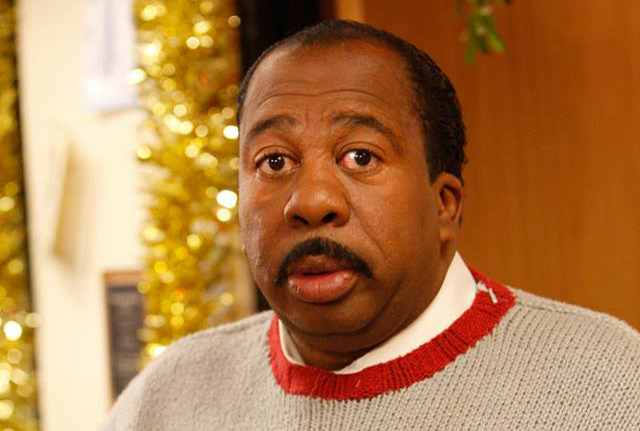 Leslie David Baker as Stanley Hudson in “The Office.” Image from Facebook.

CROSS-RACIAL IDENTIFICATION HAS LONG BEEN A PROBLEM IN COURTROOMS

Of course, my wife and I got caught up in the short exchange. She thought Stanley didn’t have a mustache. I knew he did. Once Stanley appeared, mustache and all, we laughed and moved on from the subject—or so I thought.

After the episode ended, she innocently asked if I ever try and educate jurors on the problems with eyewitness identification, especially those with someone from one race trying to identify a person from another. She made her case for how many times we have seen this man—hundreds, if not thousands of times; but regardless, she still got the ID incorrect.

I smiled and explained. It’s not just her. The issue is a problem in every courthouse across the country. As early as 1972, courts recognized the issues surrounding racial bias in identifying witnesses. Almost 50 years later, defense attorneys still have to fight for judges to instruct juries on the inherent problems associated with cross-racial identification.

Studies from various academic sources have confirmed the existence of racial bias in perception of self and others. The first study regarding a “cross-race effect” was conducted in 1914. Cross-racial identification specifically has been called into question as early as 1969, in the classic study conducted by Roy Malpass and Jerome Kravitz, “Recognition for Faces of Own and Other Race.”

As technology increased, researchers were able to discover that this bias is not something that is necessarily learned. As early as 2011, studies showed that white infants scanned “other-race faces” differently. But the phenomenon is not limited to just whites. In 2014, a study found that both Chinese children and adults scan the faces of their own and other races differently by focusing on different parts of the face. A 2017 study found that 11-month old Hispanic and white infants focused “consistently greater attention to black over Hispanic faces, to black faces over white faces, and to Hispanic over white faces.”

However, most of the legal world has focused on racial bias in adults, and for good reason. Almost exactly 10 years ago, the Innocence Project informed the legal community that “in 66 of the 216 wrongful convictions overturned by DNA testing, cross-racial eyewitness identification was used as evidence to convict an innocent defendant.” That number has risen.

The National Registry of Exonerations has recorded 2,211 wrongful convictions that were eventually overturned because of DNA or other evidence. According to one amicus brief filed by the Innocence Project, “of the 353 DNA exonerations nationwide, 70 percent involved eyewitness misidentification. Nearly half of those cases involved a defendant and a witness of different races.” That brief was filed in one of the more recent cases in which a state court finally recognized the inherent problems associated with cross-racial identifications.

People v. Boone involved white men who had their cellphones stolen, on separate occasions, by an African-American man. The suspect African-American was placed in two six-person lineups, and each of the white victims separately identified him. At the defendant’s jury trial, his defense attorney asked that the jury be instructed on the issues of cross-racial identification. The instruction was ultimately denied, and the defendant was found guilty on both robbery counts.

The New York State Court of Appeal held that:

in a case in which a witness’s identification of the defendant is at issue, and the identifying witness and defendant appear to be of different races, a trial court is required to give, upon request, during final instructions, a jury charge on the cross-race effect, instructing (1) that the jury should consider whether there is a difference in race between the defendant and the witness who identified the defendant, and (2) that, if so, the jury should consider (a) that some people have greater difficulty in accurately identifying members of different race than in accurately identifying members of their own race and (b) whether the difference in race affected the accuracy of the witness’s identification. The instruction would not be required when there is no dispute about the identity of the perpetrator nor would it be obligatory when no party asks for the charge.

Sadly, this position has not been accepted by all courts across the nation; however, hopefully it is simply a matter of time. As with most state court decisions, the issue at hand will have to be litigated in each individual jurisdiction unless and until the matter is established as a pre-empted mandate from the U.S. Supreme Court.

As such, those of us fighting false identifications every day in the legal trenches have to make a concerted effort to raise and preserve this issue until it is recognized in every court across the country. Moreover, if you practice in a jurisdiction in which there is not a standard jury instruction for cross-racial identification, go ahead and proffer something even stronger. Don’t simply settle for an instruction that informs the jury that it “may” consider the issue; let them know that they should consider it. After all, there is plenty of scientific research to back up the assertion.