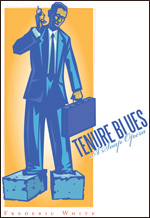 “It is a work of fiction, you know,” White tells the ABA Journal. “I wrote it kind of as a movie of the week. We’re not talking about Hemingway here.”

The new novel is Tenure Blues: A Soap Opera. According to a press release, White wrote the “tongue-in-cheek” mystery based on his “firsthand observations of needy students, eccentric faculty members, power-hungry alums, manipulative trustees and cheating spouses.”

Have any of the aforementioned people had anything negative to say about the book? Not really, White says. A couple of professors thought the faculty members weren’t eccentric enough, and a few readers pointed out some proofreading errors. (Corrections will be made in new copies of the book.) “In terms of substance,” White says, “I haven’t gotten a bad comment yet. People kind of take it for what it is. It’s not meant to be heavy. It’s meant to be something you can read on an airplane.”

Tenure Blues has sold a few hundred copies since its release in December by AuthorHouse, a self-publisher that charged White about $1,500. The book is also available in print and electronic form on Amazon.com, and White is looking into the possibility of carrying it at Hudson News in airports.

Writing has been an ambition for White ever since he opted for a career in law rather than journalism. He worked on Tenure Blues for seven or eight years. “You put it down, you do your real work, you pick it up again,” he explains.

White has been law dean at Texas Wesleyan since 2008. Before that he served as dean of Golden Gate University law school, a professor at Cleveland-Marshall law school, and a municipal bond lawyer at Squire, Sanders & Dempsey. Is he giving up the day job? “Not according to my wife,” White says.

White’s unsure if another book is in the offing. He’s got a notebook with about 20 ideas in it, and readers of Tenure Blues will see three or four possibilities for some offshoots. “But I’ll cross that bridge when I come to it,” White says. “We’ll just have to seek how this one works out.”