GPS ankle monitors can call and record people without consent; do they violate 5th Amendment? 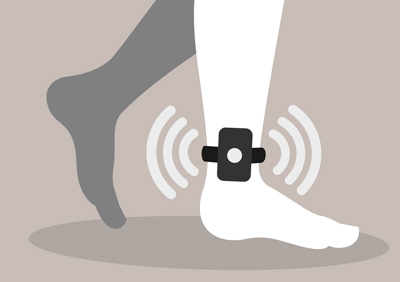 Updated: GPS electronic monitoring devices made by a company called the Track Group can call and record people who are required to wear the ankle monitors because they are on probation or awaiting trial.

The device, known as the ReliAlert XC3, is supposed to play a three-note sound when an official calls and a recording begins. But a technician testified in a 2014 case in Puerto Rico that the listening and speaking capabilities can be turned on without warning, according to a joint report by the Appeal and CityLab.

Calls made through the devices can be initiated at any time, and there is no way to decline an incoming call.

The Track Group refused to reveal other jurisdictions where the monitors are being used, citing possible competition.

AJ Gigler, vice president of marketing and product management for the Track Group, told the ABA Journal in a letter that there has been no substantiated claim of abuse involving the monitor.

The court that heard testimony about the devices being able to be switched on without warning found the challenge to use of the device to be “totally meritless,” according to Gigler. The court had denied a motion to remove the monitor filed on behalf of a man wearing the GPS monitor as a condition of bail.

“The court found no actual instance of the Track Group’s device having been operated improperly or illegally,” Gigler said. Further, Gigler said, the judge found that the claim “was specific to a hypothetical scenario of speculative nature.”

“Any statement indicating that the listening and speaking capabilities can be activated without warning is patently false,” Gigler said.

Gigler also said people who wear the devices receive disclosures and conditions, “including the participant’s express consent to use of a device that is capable of communications occurring on a recorded line.”

Cook County’s contract with the Track Group had required calls made through the devices to be recorded, time-stamped and archived for 18 months.

Cook County’s chief judge announced a review of privacy concerns after the Appeal raised questions about the devices. Spokesperson Pat Milhizer said the Track Group will be told to disable recording capabilities pending the review.

The Track Group is the only company that has devices with patented built-in communication capabilities, according to the joint report.

Kate Weisburd, a professor at the George Washington University Law School, told the Appeal and CityLab that there could be a constitutional challenge if recorded information reveals incriminating information to police.

She also said consent is an issue, even when people accused or convicted of crimes consent to wearing the monitor.

“Consent can’t just be a blanket, carte blanche excuse for any type of privacy invasion,” Weisburd told the publications. “There has to be some limit.”

ABA Journal: “Sky-high spy: with GPS probing, the zone of privacy is getting even smaller”

ABAJournal.com: “New law says individuals can’t track each other via GPS once they are warned not to”