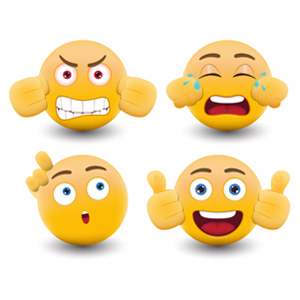 Jurors in the trial of the man accused of running the online black-market bazaar Silk Road should consider how emoticons are used in email evidence, a federal judge has ruled.

U.S. District Judge Katherine Forrest of Manhattan ruled after the lawyer for defendant Ross Ulbricht complained that prosecutors had failed to inform jurors about a smiley face emoticon—also known as an emoji—in an Internet post, the New York Times reports.

The objection by lawyer Joshua Dratel followed a letter he wrote to Forrest before the trial asking that all online communications such as chats, posts and emails be shown to jurors rather than read aloud. Things like emoticons, all capital letters and repeated question marks can change the meaning, he argued.

Forrest allowed the online communications to be read aloud in court, but said she would instruct jurors there was no evidence they were communicated orally, the Times says. Forrest also said jurors should read the communications. “They are meant to be read,” Forrest said. “The jury should note the punctuation and emoticons.”

The government has charged Ulbricht with narcotics trafficking conspiracy and other charges for his alleged affiliation with the website said to be responsible for nearly $200 million dollars in drug sales.

Next:
How do you really feel? Feds apparently want to know