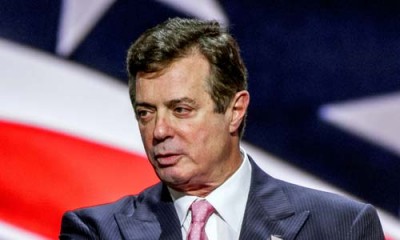 Paul Manafort, a former campaign chairman for President Donald Trump, was wiretapped as a result of secret FISA court orders, according to a report based on anonymous sources.

The sources tell CNN that Manafort was first wiretapped in an FBI investigation into consulting firms’ work for Ukraine’s former ruling party, but the surveillance was discontinued for a lack of evidence. A second alleged wiretap was part of an FBI investigation into associates of the Trump campaign and suspected Russian operatives. A source who spoke to CBS later confirmed the wiretapping report.

The wiretaps didn’t cover the period in June 2016 when Manafort along with Donald Trump Jr. and Jared Kushner met with a Russian lawyer at Trump Tower. Donald Trump Jr. had been promised damaging information about Hillary Clinton before the meeting.

Warrants issued by the court established by the Foreign Intelligence Surveillance Act are based on probable cause that a person is an agent of a foreign power. The standard is not quite same as the usual probable cause requirement, Lawfare reports in a post noted by the Marshall Project and the Washington Post.

Details from the wiretaps have been turned over to special counsel Robert Mueller, according to CNN. Mueller’s team is using what some describe as aggressive “shock-and-awe tactics” to intimidate potential targets and witnesses, the New York Times reports.

FBI agents raided Manafort’s home in July, picking his lock to enter, and then warned that they planned to indict him, anonymous sources tell the New York Times. Mueller has obtained “a flurry of subpoenas” to compel witness testimony, and has even subpoenaed a former lawyer for Manafort.

While Mueller is using tough tactics against witnesses outside the White House, it is showing more deference to White House officials by seeking voluntary interviews rather than issuing subpoenas, according to the Times.

The subpoenaed former Manafort lawyer is Melissa Laurenza, a specialist in lobbying law, according to the Times sources. Lawyer-client conversations are usually privileged, but there is an exception when lawyers file public documents on behalf of a client, the Times says.

Manafort has previously denied that he ever knowingly communicated with Russian operatives.