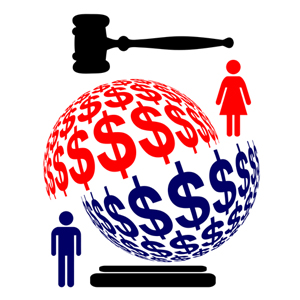 An exonerated inmate who married his wife while he was in prison can’t exclude his $20 million wrongful-conviction settlement from marital property, an Illinois appeals court has ruled.

The Illinois Court of Appeals ruled in the case of Juan Rivera and Melissa Sanders-Rivera, the Chicago Tribune reports. Rivera had been imprisoned since his arrest in the 1992 murder of 11-year-old Holly Staker; he was cleared by DNA evidence and released from prison in January 2012.

Rivera was married on Halloween in 2000; he filed for divorce in May 2014. His settlement payout, after taxes and attorney fees, was about $11.4 million, according to court records cited by the Tribune.

The appeals court sided with Sanders-Rivera in a Sept. 30 decision (PDF). Rivera “did not have a property interest in his lawsuit (or stated differently no lawsuit existed) until the appellate court vacated his conviction in 2011,” the appeals court said. “Because the lawsuit accrued in 2011, during the marriage, it is marital property subject to distribution.”

Rivera’s lawyer, Michael Berger, called the decision “a further injustice to Mr. Rivera” in a comment to the Chicago Tribune. “Hopefully we’ll be able to reverse the appellate court decision,” Berger said. Even if he doesn’t succeed on appeal, Berger hopes jurors will grant only a nominal amount to Sanders-Rivera.

The lawyer for Sanders-Rivera, Brian Schroeder, praised the decision in a statement. “The appeals court was absolutely correct, and its decision should be upheld,” Schroeder said. “Melissa is entitled to more than a nominal amount because she was a loving wife who visited Juan hundreds of times and provided him invaluable emotional support during the many years that no one believed in him.”

Updated at 11:50 a.m. to include statement from Schroeder.