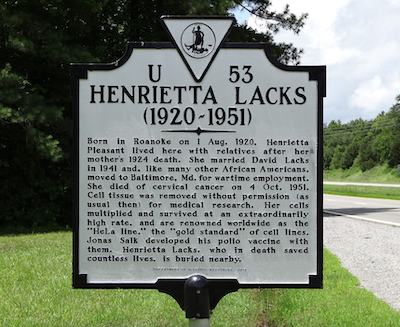 The estate of Henrietta Lacks has filed a lawsuit alleging that a biotechnology company is profiting from the unauthorized use of living tissue taken from the Black woman without her consent or knowledge in a 1951 operation for her cervical cancer.

The lawsuit was filed in Baltimore federal court against Thermo Fisher Scientific Inc. on Oct. 4, the 70th anniversary of Lacks’ death.

NPR and Courthouse News Service are among the publications with coverage. The filing was announced the same day by lawyers Ben Crump, Christopher A. Seeger and Kim Parker.

Lacks died despite the operation at Johns Hopkins Hospital, which said it never sold or profited from the so-called HeLa cells from her tumor. The tissue taken in the operation became the first human cell line to be reproduced outside the body, helping researchers develop lifesaving therapies, such as the polio vaccine and treatment for sickle cell anemia.

Most cell samples die shortly after they are removed from the human body, but Lacks’ cells were able to be reproduced in the laboratory. Johns Hopkins Hospital gave away the cells for free and did not reveal the source until the early 1970s.

Thermo Fisher Scientific isn’t the only company profiting, and it is “going to have a lot of company soon,” one of the lawyers said, hinting at additional lawsuits.

The suit alleges that Thermo Fisher Scientific was unjustly enriched and should disgorge all its net profits from commercializing the HeLa cell line.

“Thermo Fisher Scientific’s choice to continue selling HeLa cells in spite of the cell lines’ origin and the concrete harms it inflicts on the Lacks family can only be understood as a choice to embrace a legacy of racial injustice embedded in the U.S. research and medical systems,” the suit says. “Black people have the right to control their bodies. And yet Thermo Fisher Scientific treats Henrietta Lacks’ living cells as chattel to be bought and sold.”