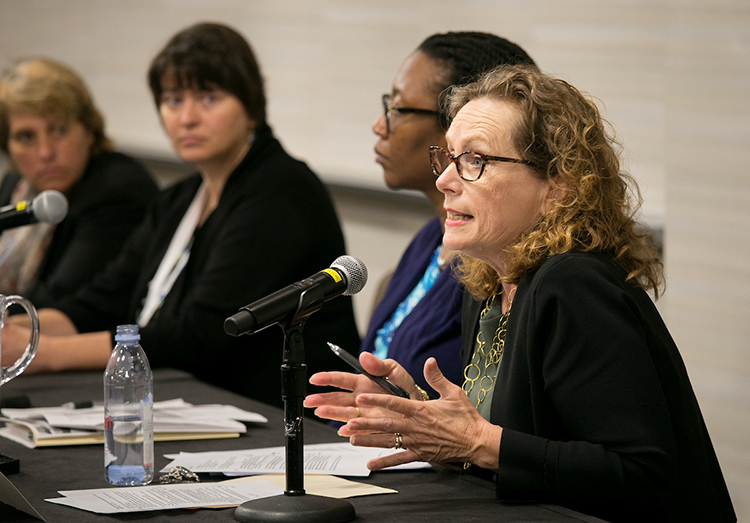 Maria Woltjen, founder and executive director of the Young Center for Immigrant Children’s Rights at the University of Chicago Law School, speaks at “Families on the Precipice: Navigating the Separation, Detention and Reunification of Families at the U.S. Border” at the ABA Annual Meeting in Chicago. Photos © Kathy Anderson

Attorneys who've spent their careers concentrating on immigration law and child welfare have been scrambling for months to deal with the fallout of what they call a “manufactured crisis” initiated by the government without adequate preparation or notice to key stakeholders.

Public attention was seized by Attorney General Jeff Sessions’ April announcement of a “zero-tolerance policy” for unauthorized border crossings and the family separations that began receiving significant media attention in May. But some immigration attorneys and child advocates had begun seeing the impact of these policies much earlier.

“In early April, we kind of woke up as a nation to something that actually happened and was initiated many months before as a pilot project in El Paso,” said Anne Chandler, executive director of the Tahirih Justice Center’s Houston office.

“We started seeing these cases in September of 2017—the government was separating children in different parts of the border,” said Maria Woltjen, founder and executive director of the Young Center for Immigrant Children’s Rights at the University of Chicago Law School. “We went to reporters and tried to get attention. They all said: ‘Well, I can’t do anything about it until it’s policy,’ and so until it actually became a policy, people really didn’t see that this was happening.”

However, Sessions’ April directive to U.S. attorney’s offices caught many other government agencies and nonprofits off guard.

“When zero tolerance was announced, this was actually new news for the individuals running the Office of Refugee Resettlement and the deportation officers, and policies and details were not in place,” Chandler said. “This was orchestrated to be a manufactured crisis.”

Chandler and Woltjen spoke on Saturday as part of the ABA Annual Meeting panel event “Families on the Precipice: Navigating the Separation, Detention and Reunification of Families at the U.S. Border,” sponsored by the Commission on Immigration.

The Trump administration’s policy decisions were not being made in response to a growing problem or acute emergency situation, the panelists said.

“We created this crisis at a time when the numbers at the border are at the lowest it’s been for 20 years,” said Uzoamaka Emeka Nzelibe, a professor at the Northwestern University Pritzker School of Law and a staff attorney with the Children and Family Justice Center of the Bluhm Legal Clinic. “There really isn’t anything happening except that we’ve made a decision, or the administration has made a decision, that it doesn’t want to honor our obligations under international law.” 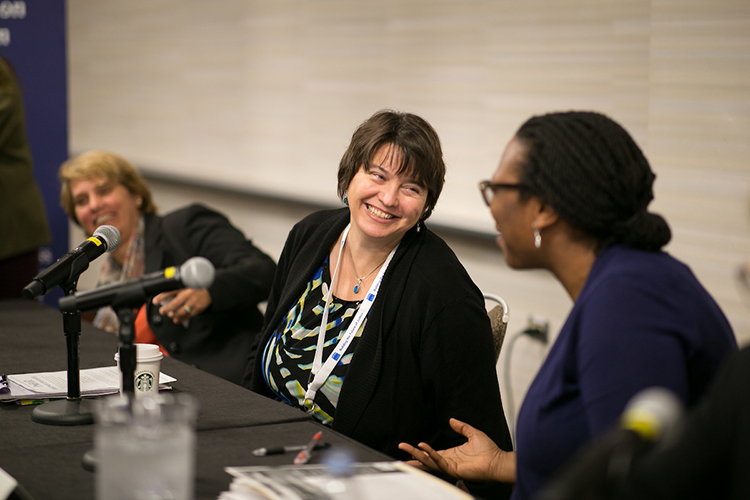 For Kimi Jackson, director of ProBAR—the ABA-sponsored South Texas Pro Bono Asylum Representation Project in Harlingen, Texas—the first inkling that the government’s immigration policies had changed came when her staff members went to conduct their usual screenings, referrals and “know your rights” presentations. ProBAR traditionally serves adults and unaccompanied minors, but its staff was suddenly encountering large numbers of distraught children who had been separated from their families.

In the immediate aftermath of the family separation policy, the need was for an urgent response from a very specific demographic: immigration attorneys with Spanish-language skills, Jackson said. But now a much broader range of volunteers are needed and being welcomed. ProBAR is also using an influx of donations and funds to add permanent staff positions, including for attorneys. Those job listings can be found at the ABA Career Center.

ABA President Hilarie Bass spoke at the beginning of the event to reiterate the ABA’s commitment to helping address the issue and to share some of what she witnessed during a trip to Texas she made in June to meet with ProBAR and visit the Port Isabel detention center. Bass described the efforts already being made by a variety of ABA entities and urged any attorney wanting to do pro bono work on behalf of immigrant children to visit ambar.org/immigrantchild to find out ways to assist.

Bass also told the audience that she has been in talks with Lumos, an international nonprofit founded by J.K. Rowling, author of the Harry Potter book series. Lumos is a child advocacy organization working to end the institutionalization of children, reunite families and assist children who have grown up in orphanages.

“They’re going to send social workers to the border who understand the long-term trauma that not just the children but these entire families will be facing during this reunification,” Bass said.

“The USA was one of the first countries to move away from warehousing children in institutions and towards family-based care,” Lumos wrote in a press release responding to the zero-tolerance policy and family separations. “It is essential to ensure that the evidence-based practices pioneered decades ago in the USA inform the next steps in responding to this current crisis.”

“There’s just so much work to be done,” Woltjen said. While immigration attorneys are needed nationwide, she said, family law attorneys and lawyers specializing in parental rights are also in demand. She also drew attention to the 11,000 unaccompanied children not part of the recent family separations who are in need of help to navigate the U.S. immigration system.

Fluency in a foreign language is not required for attorneys to be helpful. “We’ll take you with your linguistic skills,” Chandler said. “We have a lot of interpreters who want cases. The reality is that, as has been described, this zero tolerance is ongoing.”

During his Thursday speech at the annual meeting, Deputy Attorney General Rod Rosenstein defended the zero-tolerance policy, saying that “if the facts of the law justify prosecution, then we’re committing the resources to ensure everyone is treated equally rather than picking and choosing who will be prosecuted.”

In addition to the increase in people being federally prosecuted for the misdemeanor offense of crossing the border without authorization, the panelists pointed out that—although family separation has ended—many families have still not been reunified despite court orders that the government do so. Eligibility for asylum has also been narrowed by Sessions’ June ruling in Matter of A-B- to exclude victims of domestic violence and gang violence; also, individuals who would previously have been released to await immigration and asylum hearings are now being held in long-term detention. All these issues could be addressed by willing attorneys.

“To think that we’re just throwing these very vulnerable parents and children into a system that is just orchestrated for disaster is quite daunting,” Chandler said. “And here we are now, three, four months later, feeling those painful after-effects of something that—with a little bit of attention to detail or care or love or compassion—could have been prevented.”