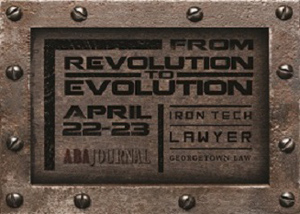 This year, to accommodate increasing outside interest from organizations, presentations from those students taking the course “Technology, Innovation and Legal Practice” were held in a spacious conference hall instead of an 85-seat classroom.

But the substance of Iron Tech Lawyer has evolved in a big way, too. Initially, students developed apps and then public-interest groups might possibly get interested in them; now, outside groups make requests ahead of time.

One of the six teams, consisting of three to four students each, followed up on outreach from the U.S. Department of Justice’s Civil Rights Division and prepared an app to mark the 25th anniversary of the Americans With Disabilities Act, with some consultation by DOJ staffers. The app, ADA2GO, helps people with disabilities or others working on their behalf–as well as businesses and organizations subject to the act–understand their rights or responsibilities.

And some of the apps now go well beyond legal-services triage and logic trees. The Alaskan Native Child Welfare Assistance app even helps prepare for custody hearings. Requested by the Alaska Legal Services Corporation, the app helps families or their representatives ensure that those children removed from their homes in the 229 federally recognized native tribe villages have their cases handled appropriately in state courts; are moved to tribal courts when appropriate; and get preferential placement in native Alaskan homes.

“The preparation for hearings is new for us,” said Tanina Rostain, who teaches the course. “And [like most of the apps] it’s built as a prototype that can be used by a lot of organizations.”

Similar courses have been launched at Vanderbilt Law School and the University of Richmond School of Law, with another in the works at the Melbourne Law School, University of Melbourne in Australia, Rostain said.

Underfunded and understaffed legal aid organizations have little extra time for technological innovation. “Here they have the luxury of a team of Georgetown law students to work out ideas and solutions,” said Mark O’Brien, co-founder and executive director of Pro Bono Net, which works on access to justice through technology, collaboration and volunteer work.

The 2015 Iron Tech Lawyer winners include:

The other entries also highly praised by the judges included Transnational Anti-Corruption Advisor, which helps NGOs and others navigate the complexities of the United Kingdom Bribery Act and the U.S. Foreign Corrupt Practices Act; and the Veterans Disability Benefits Advisor, which helps disabled vets determine their eligibility for various benefits.

The judges were David Curle, director of strategic competitive intelligence at Thomson Reuters Legal; Rebecca Sandefur, assistant professor of sociology and law at the University of Illinois; and William M. Treanor, executive vice president and dean of the Georgetown University Law Center.

Digital tools already in use

This year’s Iron Tech Lawyer concluded with a full-day conference on Thursday focusing on legal technologies. “From Revolution to Evolution—Digital Tools in Law Practice” focused on digital tools being used in today’s legal market by both law firms and in-house counsel.

The conference featured five panels on legal technology including those being used in litigation and intellectual property practices. Lawyers from Seyfarth Shaw, Littler and Goodwin Proctor showcased some of the software and apps their firms use (and in some cases created) to help make their work more efficient and effective. BMO associate general counsel Carla Goldstein discussed how her bank has used technology to pare down its roster of outside counsel. The bank also has internal software to allow its lawyers to discuss firms, lawyers and the quality of their work.

A second panel on cross-practice approaches and tools included several speeches designed to inspire the audience ranging from the myth of Icarus, from Neota Logic’s CEO Michael Mills, to FastCase’s CEO Ed Walters reminding lawyers and law students to never stop seeing. Meredith Williams-Range, Baker Donelson’s chief knowledge management officer, showed off some of her firm’s proprietary software, including internally created compliance software for one client. She also talked about the incentives her firm is using to get lawyers to use technology and innovate. Some of those incentives include allowing lawyers to share in the profits of any technology the lawyers create or help create that is sold outside the firm.

Dan Lear, Avvo’s director of industry relations, along with Scott Rechtschaffen, the chief knowledge officer of Littler and Dave Zvenyanch, a lawyer who now works for the General Service Administration’s 18F and Boston solo William Palin, winner of the first ABA Journal Hackcess to Justice hackathon, all spoke about how technology can and is impacting career choices and options in the law.

A fourth panel focused on how technologies can impact access to justice and open government data. Michael Hollander, a staff attorney at Philadelphia’s Community Legal Services showed how his agency’s collection of data was used to construct an effective to defense of a decade’s worth of illegal bail collections in the city. The Legal Services Corp.’s Glenn Rawdon talked about how technology can and is improving access to justice. Mark O’Brien, a founder of Pro Bono Net, showcased proprietary software his lawyers are using to make the delivery of legal services to clients more effective and more accessible for the clients.

Clarence Wardell, a Presidential Innovation Fellow at the GSA, showed how data can be collected from state and local agencies and even law enforcement to help further policies. He noted how law enforcement in Seattle participated in a hackathon to find a way to open their records to the public which, he says, was something they were willing to do but didn’t have the knowledge and wherewithal to do in an accessible way. Rebecca Williams, a lawyer with Data.gov, noted in her presentation that open data does not just make the data available to the public, it helps the public set policy and push for change.

In a final panel, participants focuses on contract management and client collaboration. Stacey Werner-Shapiro, senior counsel at Choice Hotels International, showed how her company bought software and discussed the challenges she faced in transitioning to the system and how effective it has been. Lawyer turned tech-entrepreneur Noah Waisberg, CEO and co-founder of Kira Inc talked about how his company started and how it has expanded into new products including contract review and management from its origins as a due diligence technology.

Two breakout sessions were held over lunch. One, hosted by 18F’s Zvenyach, was a coding class for lawyers. Zvenyach, a self-taught coder, says it’s not a necessity for lawyers to learn to code but noted how it has helped him in his career path. The second break-out session was on data mining for lawyers and was taught by Greg Elin, the founder of Govready.org. Thomson-Reuter’s David Curle, director of strategic intelligence for the company, was the keynote speaker.

The event was sponsored by the ABA Journal and Neota Logic, which provides the platform for the law students to build web pages and other tools without needing high-level programming skills.

Last updated at 12 p.m. April 24 to add information about day two of the event.