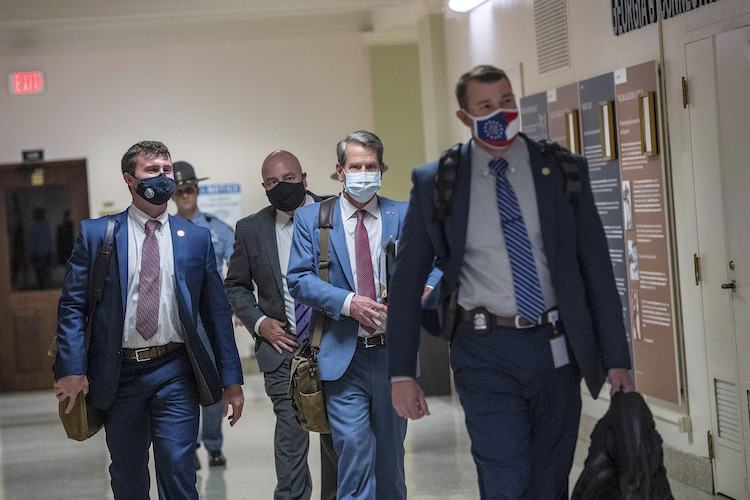 Georgia Republican Gov. Brian Kemp signed sweeping voting restrictions into law on Thursday, just months after a Democrat won the presidential election in the state for the first time in nearly 30 years.

“Significant reforms to our state elections were needed,” Kemp said after signing SB 202, which passed along party lines. “There’s no doubt there were many alarming issues with how the election was handled, and those problems, understandably, led to a crisis of confidence in the ballot box here in Georgia.”

Opponents of the 98-page bill, which also came after two Georgia Democrats won runoffs for the U.S. Senate and gave them control of the chamber, told the Atlanta Journal-Constitution that it will create barriers to absentee voting and voting in runoffs.

Instead of the current signature-matching process, absentee voters will be required to show their driver’s license or other documentation to prove their identity. While weekend voting before general elections will be expanded, early voting before runoffs will be limited to one week before election day.

“It is unbelievable that there are still some people trying to stop people from voting today,” State Rep. Erica Thomas, D-Austell, told the Atlanta Journal-Constitution. “You are changing the rules, cutting the voting hours, and making it more difficult for people to vote.”

The bill mandates that ballot drop boxes be located inside early voting locations and only available to voters up until four days before an election. It also requires voters to request absentee ballots 11 days before the election, disqualifies ballots cast in the wrong precinct, and prohibits the distribution of food or drinks to voters waiting in line.

Protesters outside the Georgia Capitol called the bill “Jim Crow 2.0” and State Rep. Park Cannon, D-Atlanta, was forcibly removed from the building and arrested after trying to witness Thursday’s bill signing. Several voting organizations, including the New Georgia Project and Black Voters Matter, filed a federal lawsuit opposing the legislation.

State Rep. Barry Fleming, R-Harlem, the bill’s sponsor, said during its floor debate it “expands accessibility” for voters. According to Courthouse News Service, he also said the bill “greatly improves the process of administration of elections while at the same time providing more accountability to ensure the integrity of the vote is properly preserved.”