Halliburton to pay $1.1B to resolve oil spill suits 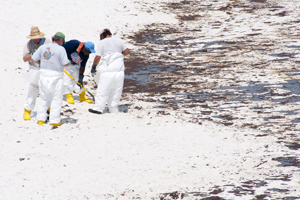 Halliburton has agreed to pay $1.1 billion to resolve suits over its work on the Deepwater Horizon oil rig that exploded in April 2010, killing 11 workers and spilling millions of gallons of oil into the Gulf of Mexico.

The settlement covers claims by residents, businesses and local governments, report the Wall Street Journal (sub. req.), the New York Times and the New Orleans Times-Picayune. Halliburton was a BP subcontractor that prepared the cement that failed to seal the oil well.

Halliburton did not admit liability; it has claimed its cement met BP’s specifications. The Halliburton settlement resolves a majority of the oil spill lawsuits, but not certain state lawsuits, Bloomberg News says.

The settlement still must be approved by a federal judge in Louisiana.