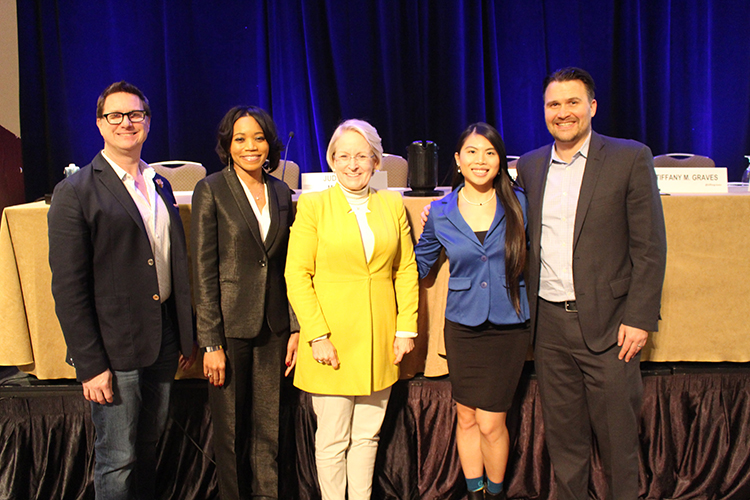 Finding the right mentor can be tricky—especially for female and minority lawyers.

A Thursday afternoon panel discussion at ABA Techshow explored several ways for women and attorneys of color to find the right mentor. The panel, titled “Mentoring Women and People of Color in Legal Tech,” was moderated by Irene Mo, a NextGen fellow at the ABA Center for Innovation and a 2017 graduate of Michigan State University College of Law.

If you are interested in having someone as a mentor, maybe you shouldn’t ask them outright, said Tiffany Graves. “The best approach might be to say, ‘I’ve been watching you, I like what I see, and this is how i’d like to shape my career. Can we grab a cup of coffee?’ ” said Graves, the pro bono counsel at Bradley Arant Boult & Cummings, who recently served as executive director of the state’s access to justice commission.

Another way to find a mentor is to reach out to someone whose work you admire. Tell him or her what you want out of your career and ask for help identifying various people who might be interested in assisting you, said panelist Judy Perry Martinez, who is of counsel with Simon, Peragine, Smith & Redfearn and special advisor to the ABA Center for Innovation

Martinez, who was selected as ABA president-elect nominee in February, agreed that it can be difficult for a potential mentee to approach an individual and ask him or her to be a mentor. Instead, she suggested that lawyers in search of a mentor ask colleagues or peers for suggestions. If they agree that a certain person would make a good mentor, then maybe they can even make an introduction. “Mentoring is a privilege and obligation,” Martinez told the ABA Journal. “As a professional in any profession, you need to figure out how to contribute and be a mentor.”

Mo, the moderator, told the audience that she’s had success meeting people at conferences, following their Twitter feeds and reaching out when a tweet interests her. That can take a relationship beyond meeting someone at a conference, Mo said, and help determine if someone would be the right person to mentor you. If it does seem like a good fit, she will ask the person for coffee.

“Once I see that they are invested in me, and they respond to my emails, I say, ‘You are my mentor, even if you don’t realize it,’ ” said Mo.

And much like the other panelists who are in positions to be mentors, Mo, as a potential mentee, said that it can be uncomfortable when someone you don’t know says that they want to mentor you.

“If it’s someone I don’t know, I always question why is this person being nice to me,” she said.

“That’s the elephant in the room. Half of being a good mentor is not being a jerk. It takes listening more than talking and an approach that’s more nuanced. When you’re walking up to someone who doesn’t look or act or talk like you, or run in the same circles as you, there should be a little suspicion,” said another panelist, Chas Rampenthal, who is LegalZoom’s general counsel. He said that he sees a lot of people getting recognition in legal tech who, like himself, are white men. Considering that, he’s interested in mentoring people who have different life experiences and are seeking a career similar to his.

Dan Lear, another panelist, said that he preferred informal mentor-like relationships, rather than programs sponsored by employers.

“People just come out of the woodwork and tell me a compelling enough story, that makes me want to invest in them,” said Lear, director of industry relations with Avvo. “You can say, ‘I want to be invested in you and how your grow because there’s something here that makes me feel good.’ ”

Martinez cautioned that some people don’t know how to be good mentors, which is why formal programs are helpful.

“There’s a real skill set that can be developed as a mentor, and in a formal program there are opportunities to learn, and it also checks on the system,” she said, adding that sometimes there’s a power dynamic in mentor relationships that makes people uncomfortable. And sometimes, neither mentors nor mentees understand boundaries in the relationships. She also told the audience that when she mentors someone, she often gets just as much, if not more, out of the relationship than the other person.

“It’s an absolutely ongoing, constant flow of ideas and information. They have different ways of looking at the same social challenges we’ve been looking at for decades, as lawyers,” Martinez said. “Not only am I mentoring them on things I’m familiar with, the flow to me has been tremendously powerful and rich.”

Updated March 8 at 7:59 pm to add identification for Irene Mo.