'Laughter is a blood sport at the court' when used by SCOTUS justices, new study says 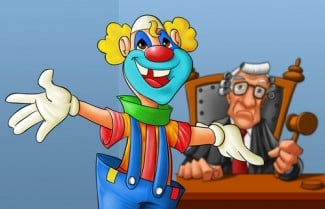 U.S. Supreme Court justices use courtroom humor as a tool of advocacy and as a signal of their power and status, according to a new study of oral arguments by two law professors.

As justices have taken on a greater advocacy role in the modern era, there has been an increase in the incidence of laughter as noted in argument transcripts, the study found. But the joking is usually barbed rather than gentle, according to the study authors, law professors Tonja Jacobi of Northwestern University’s Pritzker School of Law and Matthew Sag of Loyola University Chicago’s School of Law.

“Humor is one of the weapons in the justices’ arsenals of rhetorical persuasion,” Jacobi and Sag wrote. The National Law Journal reported on the study, noted by How Appealing.

The authors cited some examples from oral arguments in the Masterpiece Cakeshop case in which a Christian baker argued that he had a First Amendment right to refuse to bake a cake for a same-sex wedding.

As a lawyer for the U.S. government argued that wedding cakes have artistic qualities, Justice Neil M. Gorsuch interjected, “In fact, I have yet to have a … wedding cake that I would say tastes great.” Gorsuch’s humor reinforced an argument that wedding cakes are consumed for their symbolism and artistry, Jacobi and Sag said.

The researchers studied more than 9,000 instances of laughter recorded in 6,864 arguments from 1955 to 2017, finding an average of 1.32 laughs per argument. Laughter increased over time, with two-thirds of the incidents of laughter happening on the courts of Chief Justices William H. Rehnquist and John G. Roberts Jr, according to the National Law Journal.

The authors concluded Breyer was “the most whimsical justice in our subjective reading,” and Scalia was the “most notorious humorist” for his “snark and sarcasm.”

As part of their study, Jacobi and Sag read oral argument transcripts from 2010 to 2017. They detected a pattern: Justices most often direct their humorous comments at lawyers with whom they disagree, at lawyers who are losing, and at novice lawyers.

Some justices—notably Breyer and to a lesser extent Justice Elena Kagan—were self-deprecating in their humor, the study found.

But “overall humor of the court is pretty mean,” the authors said. “We conclude that judicial laughter is certainly not a sign of an empathetic attempt to equalize a hierarchical system; rather, laughter is a blood sport at the court.”