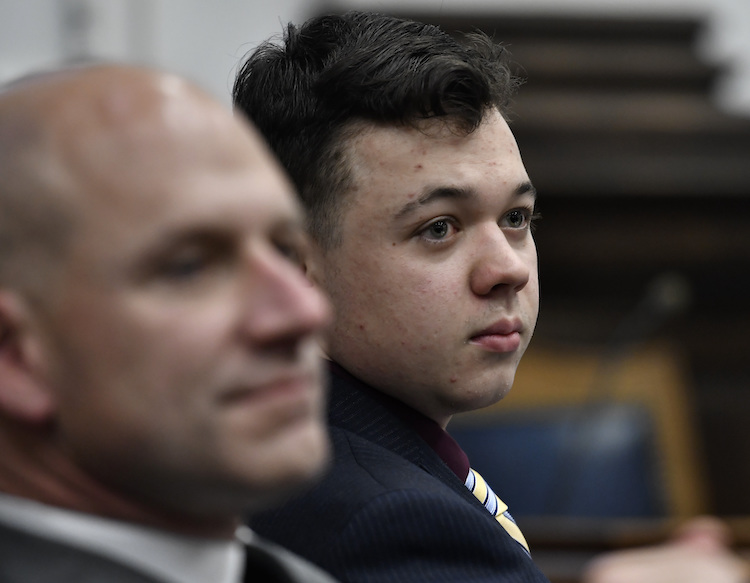 Kyle Rittenhouse, right, and his attorney Corey Chirafisi listen during his trial at the Kenosha County Courthouse in Kenosha, Wisconsin, on Thursday, Nov. 11. Rittenhouse is accused of killing two people and wounding a third during protests over police brutality last year. Pool photo by Sean Krajacic/The Kenosha News via the Associated Press.

A prosecutor in the trial of Kyle Rittenhouse angered the judge Wednesday when he referred to the teenager’s silence after his arrest and then asked questions related to a video in which Rittenhouse discussed wanting to shoot shoplifters.

Judge Bruce Schroeder dismissed jurors before criticizing Kenosha Assistant District Attorney Thomas Binger for the remarks, telling him at one point, “Don’t get brazen with me.”

The Washington Post, the Associated Press and Slate are among the publications with coverage.

The Washington Post described Schroeder’s scolding as a “dramatic rebuke” of the assistant district attorney during the trial of Rittenhouse for shooting three people, two of them fatally, at racial justice demonstrations in Kenosha, Wisconsin, in August 2020.

According to the Washington Post, some experts viewed the trial “as a rocky prosecution for Binger, who was undercut by his own witnesses, made strategic missteps, and has struggled with inconvenient facts and a high legal bar to prove Rittenhouse’s guilt.”

Slate has details on the line of questioning that spurred the defense to request a mistrial with no opportunity for retrial.

In the remarks about Rittenhouse’s silence, Binger said on cross-examination of Rittenhouse, “Since Aug. 25, 2020, this is the first time that you have told your story.” That prompted an objection, which was sustained.

After jurors left the courtroom, Schroeder warned Binger that his questioning was “right on the borderline” and said it is “a grave constitutional violation for you to talk about the defendant’s silence.”

The other incident concerned a video in which Rittenhouse talked about wanting to shoot shoplifters. Schroeder had said before the trial he was inclined to ban the video as inadmissible propensity evidence, but he could reassess that decision at trial.

Binger appeared to reference the video when he asked Rittenhouse, “You have previously indicated that you wished you had your AR-15 to protect someone’s property, correct?”

After jurors left the courtroom, Schroeder again scolded Binger, who responded that Schroeder had “left the door open” for reconsideration.

“For me, not for you!” Schroeder said. “You should have come and asked for reconsideration!” As Binger kept arguing, Schroeder then told him, “Don’t get brazen with me.”

Dan Adams, a defense attorney and former prosecutor in Milwaukee, told the Washington Post that the incident was part of a difficult case for the prosecution, whose shooting witnesses sometimes bolstered Rittenhouse’s self-defense claim. Among them was Gaige Grosskreutz, the man shot and wounded by Rittenhouse.

“That was the most explosive testimony in the whole trial,” Adams told the Washington Post. “Binger introduced … witnesses that could have easily been introduced in the defense’s case. It was unclear what the strategic value of those witnesses were.”

Paul Bucher, a defense attorney and former district attorney in Wisconsin, told the Washington Post that the prosecution also erred by overcharging the case.

Rittenhouse was charged with several offenses, including intentional, reckless and attempted homicide; reckless endangerment; a curfew violation; and possession of a firearm as a minor. Schroeder dismissed the curfew violation charge Tuesday.

Rittenhouse had testified that the first man he shot had put his hand on Rittenhouse’s rifle and the second hit him with a skateboard, according to prior coverage by the Associated Press. Grosskreutz was the third man shot by Rittenhouse. As Rittenhouse began to testify about the shootings, he broke down on the stand and started sobbing.

Prosecutors plan to seek lesser versions on some charges, NPR reports. A Wisconsin defense lawyer, Julius Kim, told NPR why he thinks the prosecution will take that step.

“I think the request for lesser included charges reflects an acknowledgement that their case might not be as strong with regard to the original charges, and that at this point, they’re willing to give up the prospect of life imprisonment for the defendant in exchange for obtaining convictions on something,” Kim told NPR.

Closing arguments in the case are scheduled for Monday.