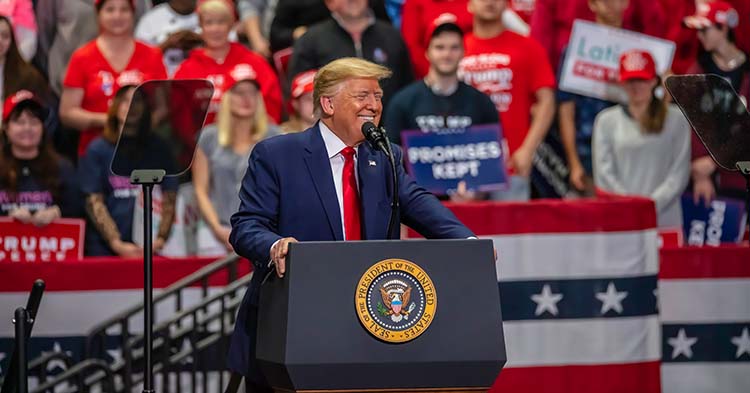 President Donald Trump at a rally in Charlotte, North Carolina, on March 3. Shutterstock

U.S. District Judge J. Nicholas Ranjan of Pittsburgh issued the stay Sunday, citing the abstention doctrine, report CNN, Reuters and the Associated Press. The stay follows a court filing by the campaign, reviewed by the Guardian and the Intercept, that cited little evidence of ballot fraud.

“After carefully considering the arguments raised by the parties, the court finds that the appropriate course is abstention, at least for the time being,” wrote Ranjan, an appointee of President Donald Trump. “In other words, the court will apply the brakes to this lawsuit, and allow the Pennsylvania state courts to weigh in and interpret the state statutes that undergird plaintiffs’ federal constitutional claims.”

The Trump campaign’s lawsuit alleges Pennsylvania ballot procedures violate the state and federal constitutions and provide fraudsters an easy means to harvest ballots. The campaign is seeking to ban ballot drop boxes, to lift the residency requirement for poll watchers, and to stop counties from counting ballots that aren’t placed in secrecy sleeves.

Ranjan had ordered the campaign Aug. 13 to provide evidence of voter fraud in its possession. The Guardian and the Intercept reviewed a partially redacted document filed by the campaign in response to the order.

The filing cited a handful of news articles, none of which concerned mail-in ballots. The filing also referenced several public records requests by the campaign to local election officials.

Three news stories were about the convictions of an election judge who took bribes and the person who bribed him, according to the Guardian. Both were Democrats.

Another was a news story about a legislative hearing that concerned how to prevent fraud in mail-in voting.

A fifth was a Fox News story about a lawsuit filed by Judicial Watch that alleged as many as 800,000 ineligible voters could be registered in Pennsylvania.

The filing also cited a 2018 news release about four election workers accused of harassing and intimidating voters who wanted to vote against Democratic Party candidates.

John Powers, an attorney with the Lawyers’ Committee for Civil Rights Under Law, told the Guardian that the evidence produced so far is “paltry.”

“There’s certainly several explosive, salacious claims in the complaint that just aren’t borne out by the facts or what’s been produced,” Powers said. “Based on what we’ve seen so far, it seems like a lot of hot air.”

The case is Trump for President v. Boockvar.