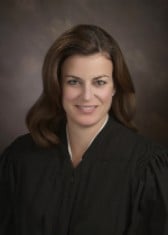 A Michigan judge who initially sent three children to juvenile detention for refusing to interact with their dad committed several acts of judicial misconduct, a special master has found.

The judge, Lisa Gorcyca, had acted in a “long, complex and very acrimonious” divorce case that had been pending before her for five years, the special master said in a July 1 report (PDF). There had been more than 40 hearings and hundreds of pleadings filed in the case. The primary issue was the refusal of the three children to participate in parenting time with their father and the father’s allegations of parental alienation orchestrated by the mother.

Gorcyca said she had warned the children that contempt was a “tool in her toolbox” and she finally acted after years of frustration.

Despite that frustration, Gorcyca committed several acts of judicial misconduct, the special master found. Gorcyca blurred the distinctions between civil and criminal contempt and failed to act in a patient and dignified manner in addressing the children, according to the special master. The Detroit News and the Detroit Free Press covered the findings.

Gorcyca ordered the oldest child, “LT,” into custody even though he wasn’t present for court-ordered parenting time that went badly; his session was scheduled for a later date, the special master said.

During the contempt hearing, Gorcyca told 15-year-old LT he was “a defiant, contemptuous young man” who should research Charles Manson while in custody. As she spoke about Manson, Gorcyca made a circular motion at her right temple that could be interpreted as expressing her view that LT is “crazy,” the special master said. She also said LT was supposed to have a high IQ, but she was doubting it because of the way he acted.

Gorcyca told 9-year-old NT that her big brother was in jail, and she would be going there too if she and her 10-year-old brother RT did not have lunch with their father in the cafeteria. When RT learned his older brother had been taken into custody, he refused to participate in the lunch.

The next month, Gorcyca canceled the contempt orders and transferred the children to summer camp.

Gorcyca’s comments and gestures were “clearly demeaning and insulting” and violated the judicial ethics code, the special master said.

“Contrary to the chilling impact Judge Gorcyca contends this case will have on judges across the state,” the special master wrote, “this is not a case that stands for the proposition that judges cannot employ stern language or make difficult decisions from the bench in contentious cases. It is a disciplinary action which stands for the singular proposition that if a judge is going to use the inherent power of contempt, the ultimate ‘tool in the tool box’ after years of ‘frustration,’ the judge may wish may wish to consult the owner’s manual to make sure that she or he are using the tool properly before employing one of the penultimate tools of inherent judicial power, a contempt finding, to deprive any individual, or children in this case, of their liberty.”

The Michigan Judicial Tenure Commission will consider the special master’s findings in September.

Gorcyca’s lawyer, Thomas Cranmer, issued a statement to the Detroit News and the Detroit Free Press. “While we respect the process, we were both surprised and disappointed with the Master’s Report,” he said. “We believe that both the facts and the law support Judge Gorcyca’s position. At this point, we are looking forward to addressing our arguments to the Judicial Tenure Commission itself and, ultimately, the Michigan Supreme Court, if necessary.”