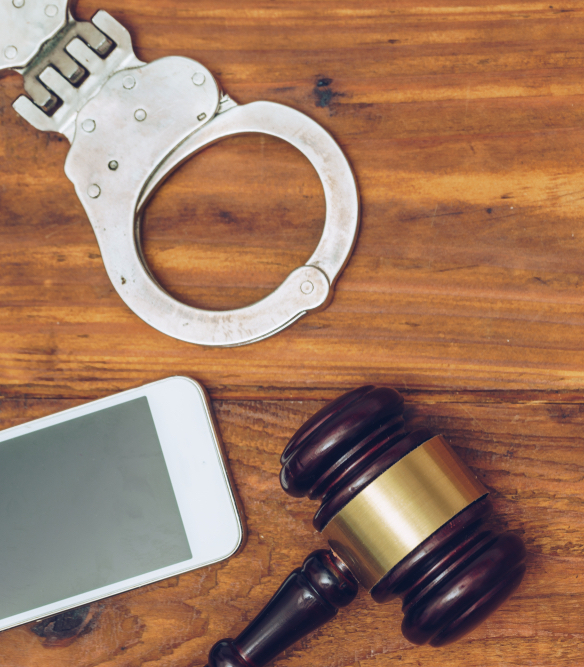 Was it possible for a suspect handcuffed with his hands behind him in a patrol car to reach his cellphone and make a call to his aunt? That’s one of the facts in dispute in the case of Omar Alston, who contends that he made the call shortly before a sheriff’s deputy pulled him out of a police vehicle in June 2011 and exposed Alston’s genitals during a search.

A federal judge had determined that Alston must have moved his handcuffed hands to the front of him, posing a safety risk, and the officer and his colleague were entitled to qualified immunity.

The Daily Report Online has coverage of a law clerk’s experiment, revealed last Thursday in oral arguments before the 11th U.S. Circuit Court of Appeals at Atlanta.

Ian Forsyth, a lawyer for the sheriff’s deputy, argued that Alston had likely moved his hands from under his feet to the front while he was in the police vehicle.

Judge Charles Wilson interjected that he has it “on good authority that you can make a phone call with your hands behind your back,” according to the article. He explained why.

“I asked my law clerk if she could make a telephone call with her cellphone behind her back, and she did it,” Wilson said.

“Was she sitting down in a patrol car in handcuffs?” Forsyth asked.

Wilson responded that if it’s possible to make a cellphone call with your hands behind your back, he wouldn’t say “it’s inconceivable to do it with handcuffs on.”

The appellate brief by Alston’s lawyers has more information on Alston’s allegations. Officers had responded to the scene after a neighbor reported that Alston’s stepson had asked for a knife, so he could kill his stepfather. After sheriff’s police arrested the youth, one of the deputies began “aggressively questioning” Alston, according to the brief.

Alston says didn’t respond to the questions and yelled, “F- - - you, I don’t have to answer anything,” as he walked away. He was tackled, arrested for disorderly conduct, handcuffed and thrown into the patrol car, he said.

According to the brief, Alston was able to access his cellphone in his pants pocket while in the patrol car and called his aunt. He talked about what had happened in a six-minute conversation.

An officer who saw Alston using the phone took it away from him. The officer who had tackled Alston allegedly jerked Alston from the back seat, threw him against the police vehicle, and proceeded to search him. In the process, Alston says, the officer pulled Alston’s shorts down and exposed his genitals to onlookers. An additional phone was discovered.

Back in the patrol car, Alston and the sheriff’s deputy who tackled and searched him “continued to engage in a heated verbal exchange,” the brief says. The officer then tried to jerk Alston from the back of the car, where Alston sat behind a metal divider. Alston yelled that his foot was caught, and the other deputy freed it.

The first deputy was able to get Alston from the car and pepper-sprayed him for several minutes, Alston says.

The officer also pepper-sprayed Alston’s stepson and the child’s mother, who tried to restrain the child after he protested that the officers were racist, the brief says. Alston was then charged with resisting arrest.

The district court treats Alston’s version of events regarding the cellphone as “somehow a matter of obvious reality, but it is far from that,” the brief says.

“The district court’s inability to imagine several ways in which Mr. Alston could have made a phone call while restrained from behind—including both the possibility of voice-activated dialing and speakerphone—is in no way equivalent to a clear determination that such events are impossible under the laws of nature,” the brief says.

Sheriff’s deputies told a different story in a brief filed by their lawyer. Alston’s language was much worse than the one F-word statement, and he was removed just once from the patrol car, they said. In the patrol car, Alston tried to unbuckle the belt of his shorts, allegedly telling a deputy that he was going to “piss all over” him.

Alston was removed from the car to reposition his cuffed hands back behind him. His penis was already out of his shorts at that time, and he physically resisted, the officers say. Alston was pepper-sprayed just once, and the stepson and mother were not pepper-sprayed at all, the brief says.

Although phone records indicate a six-minute phone call was made on Alston’s phone, there is no evidence that it was made in the police vehicle or that Alston was the person making the call, the officers say.