Jurors take instructions seriously, but do they understand them? 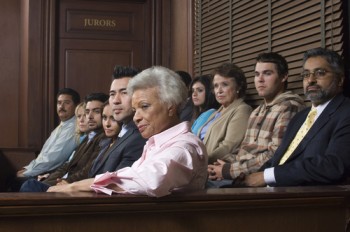 Researchers videotaped deliberations in 50 civil cases and found that at least one juror read an instruction out loud in 92 percent of them, according to researcher Shari Seidman Diamond, a Northwestern University law professor. Twenty-six of the juries commented on instructions during the first five minutes of deliberations, a Northwestern University Law Review article (PDF) notes on the study.

Jurors had a comprehension error in 16 percent of total comments about instructions, though the mistake was corrected about half the time by the judge or another juror.

The low percentage of misunderstandings was surprising to some panelists at an ABA Annual Meeting program on Friday called “How Juries Think and Behave: Empirical Research from Real Jury Deliberations.” The program was one of several CLE in the City sessions, new for the annual meeting this year and held at New York City law firm offices, including this one at Orrick Herrington and Sutcliffe.

Susan Fillichio, a senior vice president at trial consulting firm DecisionQuest, said she finds a greater misapplication of the law when observing mock trials and conducting post-trial juror interviews. She surmised that Arizona jurors studied may have had an easier time with jury instructions because the cases were relatively straightforward.

Susman Godfrey partner Stephen Susman, one of the leaders of the Civil Jury Project at New York University School of Law, had a more detailed suggestion. All jurors should get iPads with written instructions and definitions, along with case information, including a cast of characters consisting of names that will be mentioned in the trial and the chronology of events. Exhibits should be added to the iPad as they are introduced at trial, and the iPads should contain real-time transcripts of testimony.

“Even if it’s gimmicky, we have to figure out ways to restore confidence in the ability of the jury,” he said.

In New York, he pointed out, jurors aren’t allowed to take the jury instructions with them into deliberations. Instead, the judge reads the instructions, a process so tedious, Susman said, that even he has trouble staying awake. The ban on instructions in the jury room makes New York the most backward state in the union, he declared.

George Silver, who is deputy chief administrative judge for the city of New York, reacted by offering to have lunch with Susman to discuss his ideas. But the lunch should be on neutral ground—maybe St. Louis—and Susman should take the first bite, Silver joked.

Many jurisdictions provide jury instructions, Fillichio said. In Arizona, each juror gets a copy, and they use them, Diamond said. In one case, jurors took turns reading a part of the instructions aloud, reminding her of a Passover Seder.

Instructions aren’t the only written material bedeviling juries, according to Fillichio. Jury verdict forms are also hard to understand.

Silver has seen the problem firsthand when jurors deliver inconsistent answers on the verdict form. When jurors ask questions about the form, there is often confusion about the meaning of proximate cause.

But Silver and Diamond had some good news about juries.

The Arizona study found that jurors actively work on the most plausible reconstruction of events that led to trial. They focus on inconsistencies in behavior and testimony, and they are sensitive to witness interests. They draw on common knowledge and experience for reference points. And while they sometimes struggle, they resolve the misunderstandings as a group.

Silver reported that he is seeing a change in attitude among jurors. Recent events, he said, have electrified jurors, and he is finding that they are happy to serve.

Previous:
After his home is raided by FBI, Trump's former campaign chair gets new legal team

Next:
With law firms lagging in diversity, how can GCs be a force for change?