Jury recommends life sentence for neo-Nazi who drove his car into crowd, killing a paralegal 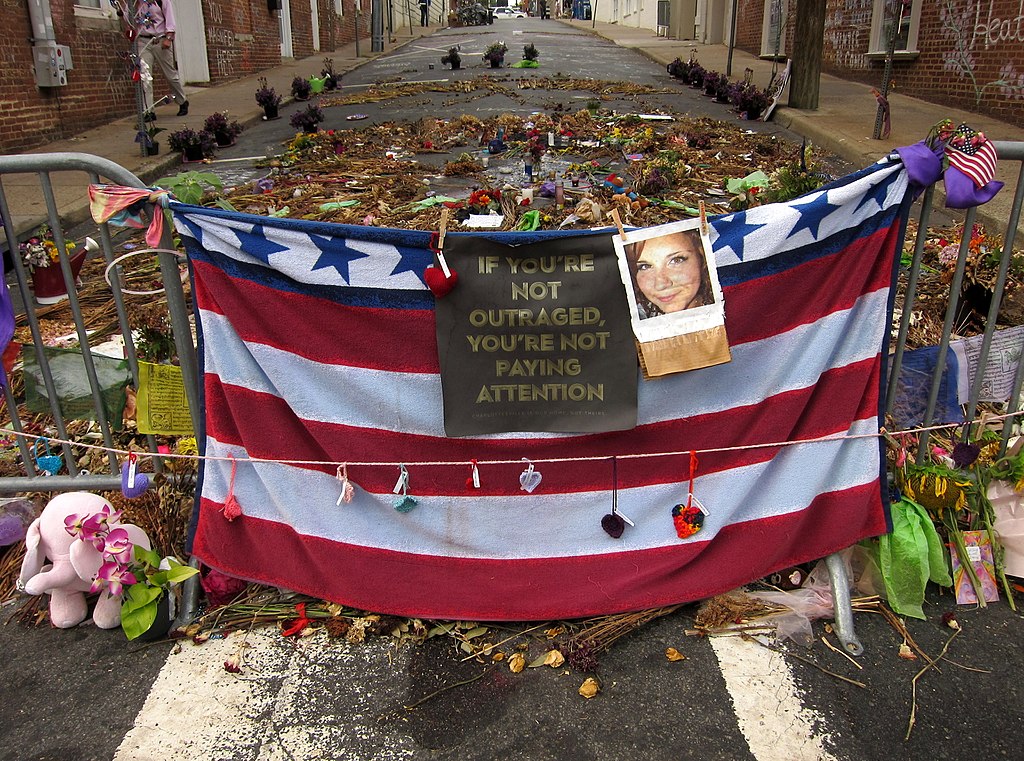 A memorial for Heather Heyer on 4th Street Southeast in Charlottesville, Virginia. Heyer was killed Aug. 12, 2017, after the Unite the Right rally. AgnosticPreachersKid / Wikimedia Commons

Jurors in Virginia on Tuesday recommended a sentence of life plus 419 years in prison for a self-avowed neo-Nazi who killed a paralegal when he drove his car into a crowd of counterprotesters at a white supremacist rally last August.

Jurors in Charlottesville convicted James Alex Fields Jr. of Maumee, Ohio, on Friday, and recommended the sentence Tuesday, report the Washington Post, Reuters, the Daily Beast and the Associated Press.

Fields was convicted of murder, aggravated malicious wounding, malicious wounding and leaving the scene of a fatal crash. Judge Richard Moore can reduce but not increase the punishment when he sentences Fields on March 29.

Lawyers for Fields had contended he was trying to protect himself when he drove into the crowd. The counterprotester he killed was 32-year-old Heather Heyer, a paralegal at Miller Law Group in Charlottesville. The law firm website has a link to the Heather Heyer Foundation, which gives scholarships to people seeking a degree or certification in law, paralegal studies, social work, social justice and education.

Heyer’s mother, Susan Bro, said in a victim impact statement that “we are forever scarred by pain,” as a result of her daughter’s death. “Heather was full of love, full of justice and full of fairness. Mr. Fields tried to silence her,” Bro said. “I refuse to allow that.” Others injured by Fields also testified.

A University of Virginia forensic psychology expert, Daniel Murrie, testified during the sentencing hearing, Murrie said Fields was diagnosed with bipolar disorder at age 6 and with a schizoid personality disorder as an adolescent, according to the Washington Post and the Daily Progress. Fields had been off his medication for two years at the time of the rally.

But the psychologist said Fields didn’t meet Virginia’s standard for a verdict of not guilty by reason of insanity.