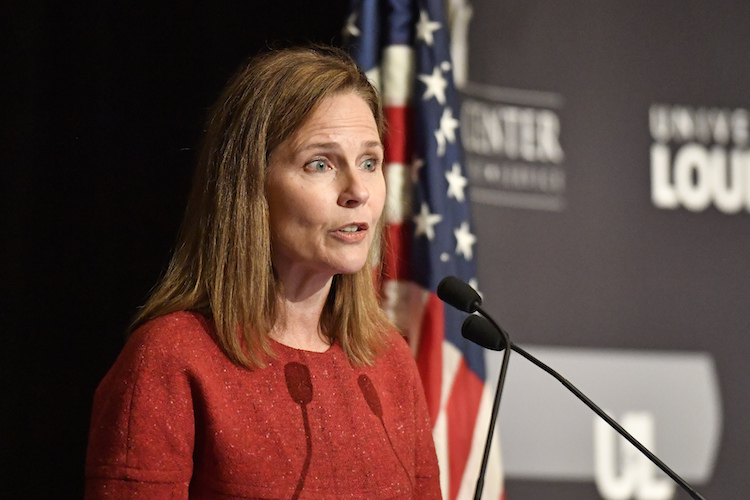 U.S. Supreme Court Justice Amy Coney Barrett speaks to an audience at the 30th anniversary of the McConnell Center at the University of Louisville in Louisville, Kentucky, on Sept. 12. Photo by Timothy D. Easley/The Associated Press.

U.S. Supreme Court Justice Amy Coney Barrett said Sunday the justices are guided by judicial philosophies, rather than political views, but the public might not see it that way.

“My goal today is to convince you that this court is not comprised of a bunch of partisan hacks,” Barrett said in remarks at the McConnell Center at the University of Louisville in Louisville, Kentucky.

The Louisville Courier Journal and the Associated Press had coverage.

Media reporting and “hot takes on Twitter” focus on the results of decisions, rather than the deliberative process, Barrett said. “That makes the decision seem results-oriented.”

Barrett cited several cases in which justices appointed by the same political party split in their decisions.

“Judicial philosophies are not the same as political parties,” she said, according to the AP and the Louisville Courier Journal.

Barrett said she is an originalist, while Justice Stephen G. Breyer is an example of the “pragmatism” philosophy.

She added that justices have to be “hypervigilant to make sure they’re not letting personal biases creep into their decisions, since judges are people, too.” She said she sometimes doesn’t like the results of her own decisions, but “it’s not my job to decide cases based on the outcome I want.”

Barrett was asked what advice she would give to young women who are considering a career in public service. Her answer: It’s possible to raise a family and be successful.

She said her children help her stay grounded because they aren’t particularly impressed that she is a justice.

“I have an important job, but I certainly am no more important than anyone else in the grocery store checkout line,” Barrett said.