Justice Kagan performs same-sex wedding, following in the footsteps of Ginsburg and O'Connor

U.S. Supreme Court Justice Elena Kagan performed her first same-sex wedding Sunday when she officiated at the Maryland wedding of one of her former law clerks.

Supreme Court spokeswoman Kathy Arberg tells the Associated Press that it was the first same-sex wedding Kagan has officiated. 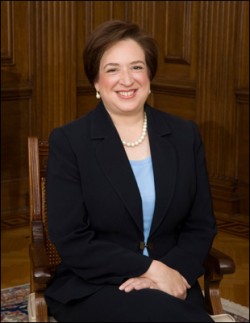 Kagan follows in the footsteps of retired Justice Sandra Day O’Connor and Justice Ruth Bader Ginsburg, who have also officiated at the weddings of same-sex couples.

Ginsburg talked about the “remarkable” shift in public opinion on gay marriage in an appearance last week at the University of Minnesota Law School, the Associated Press reported at the time. Ginsburg also talked about how quickly the U.S. Supreme Court is likely to weigh the constitutionality of state bans on gay marriage. The key, she said, will be an upcoming decision by the Cincinnati-based 6th U.S. Circuit Court of Appeals.