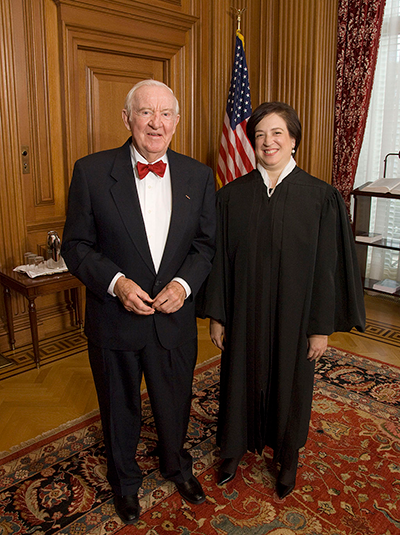 Retired Justice John Paul Stevens and Justice Elena Kagan, who was appointed to his seat after he retired in 2010. (Photo by Steve Petteway, photographer for the Supreme Court of the United States / Wikimedia Commons.)

Stevens died Tuesday at the age of 99 in a Florida hospital after suffering complications from a stroke. He was nominated to the Supreme Court by President Gerald Ford in 1975 and served until his retirement in 2010.

Though Stevens was the leader of the court’s liberal bloc, Stevens had insisted he was “pretty darn conservative” and said he appeared liberal as the court shifted to the right.

Stevens had opposed the confirmation of Justice Brett M. Kavanaugh after his tumultuous confirmation hearing, but there was no hint of rancor in Kavanaugh’s statement on Stevens’ death.

Kavanaugh called Stevens “a patriotic son of the Midwest” who made immense contributions to the law. “In court, he treated others with extraordinary respect and established an enduring model of decency and courtesy for all judges and lawyers,” Kavanaugh said. The statement said Kavanaugh and his wife would pray for Stevens and his family.

Ginsburg also stressed Stevens’ decent nature. “In a capital city with no shortage of self-promoters, Justice Stevens set a different tone,” Ginsburg said. “Quick as his bright mind was, Justice Stevens remained a genuinely gentle and modest man. No jurist with whom I have served was more dedicated to the judicial craft, more open to what he called ‘learning on the job,’ more sensitive to the well-being of the community law exists (or should exist) to serve.”

Justice Sonia Sotomayor recalled that Stevens was the first justice to welcome her on her first day on the Supreme Court. “We must have talked for hours that day,” Sotomayor said. “Justice Stevens was impossible not to like: affable, humble, and unfailingly kind.” Her statement also noted Stevens’ “deep regard for the Constitution, unflinching commitment to individual rights, and refusal to ignore even the smallest injustices.”

“I was honored to succeed Justice John Paul Stevens on the Court, and his extraordinary tenure has inspired me ever since,” said Justice Elena Kagan. “He was one of a kind—a brilliant lawyer with a passion for justice, a person of rare independence who modeled collegiality and valued institutions, a modest man who achieved greatness in both his majority and his dissenting opinions.”

Retired Justice Anthony M. Kennedy also recalled conversations with Stevens on subjects that included literature, sports, history and the law. “We used to say that we should not visit each other’s chambers too often because once we started to talk it was hard to stop,” he recalled.

Many justices—including Chief Justice John G. Roberts Jr.—recalled Stevens’ service to the country as a veteran of World War II and his dedication to public service.

The shortest statement came from retired Justice David H. Souter. “He was the soul of principle and an irreplaceable friend,” Souter said.