While many practices have suffered during the COVID-19 pandemic, cannabis law is among the few that have actually prospered, Amanda Ostrowitz said during a Wednesday afternoon event at the ABA Techshow 2021.

“States are really looking for new revenue opportunities now, and they are seeing that there are jobs in cannabis,” said Ostrowitz, founder and CEO of CannaRegs, a cannabis legislation tracking platform that is now part of Fyllo. “We are seeing fast-tracking of legalization like never before. There is such a movement right now.”

During her session, titled “Cannabis Law: What You Need to Know to Represent Clients in the Country’s Fastest-Growing Industry,” Ostrowitz pointed out that cannabis is expected to be a $85 billion industry by 2030. While cannabis is still illegal at the federal level, there are 36 states that permit its medical use and 15 states that allow its recreational use. 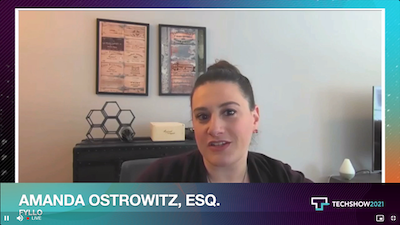 Amanda Ostrowitz, founder and CEO of CannaRegs, speaks at the ABA Techshow 2021 on Wednesday.

She added that she believes Connecticut, New York, Pennsylvania and Virginia are likely to legalize cannabis in some form this year, and that other states, such as Delaware, Maryland, Minnesota, New Mexico, North Dakota and Wisconsin, could possibly pass related legislation.

The legal profession has similarly increased its focus on cannabis law. Two years ago, Ostrowitz said, less than 10% of Am Law 100 firms had the word “cannabis” on their websites. Now, she said, nearly 40% have cannabis practice groups or are actively working in the space.

“That’s night and day,” she said, adding that Fortune 500 clients are seeking counsel on issues related to cannabis.

Ostrowitz explained that several law firms have established a cannabis practice group because of client demand. Others have gotten involved through their Food and Drug Administration practice or other regulatory practice groups.

She provided practical steps to lawyers who are interested in getting involved, emphasizing the importance of first talking to their firm’s general counsel about ethics considerations. She said in some states, lawyers need to worry about ethics violations if they advise on cannabis.

Ostrowitz suggested that lawyers consult with their malpractice insurance company since a law firm could unwittingly void its practice policy by aiding and abetting in a federal crime.

She also recommended that partners vote on whether they want to start a cannabis practice, along with what types of clients they want to serve and the level of visibility they want to have in the space.

“Are we going to announce a cannabis practice group?” she said. “We can do this work quietly and not advertise it. I know a firm that has done it for eight years, but they will not put it on their website and they are fine with that. These are all practical conversations you need to have in your firm.”