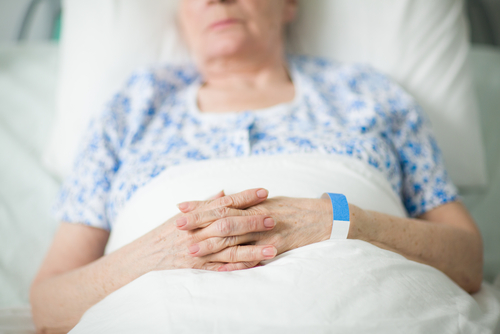 A justice on Massachusetts’ top court has declined to impose an interim suspension on a lawyer convicted of neglect in Rhode Island for failing to provide adequate care for his mother who has dementia.

Kakfer concluded that a temporary suspension isn’t warranted at this time, but Vose must notify current and would-be clients of the conviction and the fact that it could eventually affect his ability to practice law.

Kafker said Vose was convicted of serious crimes, but they didn’t arise from his law practice, and they didn’t involve “dishonesty, fraud, deceit or misrepresentation.”

Vose was sentenced in February 2020 to five years in prison, with three years suspended, the Providence Journal reported at the time. He was released on bail pending appeal. The conviction stems from events that happened in 2015.

According to Kafker’s opinion, the criminal trial transcript indicated that Vose’s mother “was found wandering around her neighborhood, disoriented, upset, lost and confused; that she looked disheveled and was wearing dirty clothes or clothes inappropriate for weather conditions; and that she was living in a disorderly, cluttered, unkept home smelling of urine.”

In one instance, Vose’s mother was found at a nearby Walgreens while wearing a bathrobe in winter, according to a press release by Rhode Island Attorney General Peter F. Neronha. In another instance, police were told that she was outside standing in the snow outside her house trying to flag down a passing plow truck.

Vose contended that his criminal appeal has merit. He said the evidence against him was insufficient, there were errors at trial, the sentencing judge abused his discretion, and he is the only person ever charged with the crime.

“There is so much more to this case than meets the eye,” Vose said in an email to the ABA Journal. “I was charged with six counts of elder neglect, one count for each time someone called the police about my mother walking in the neighborhood. She had mild dementia at the time, and would get confused momentarily, but would quickly recover and continue home. She was also being tracked with GPS. One count involved her walking to Walgreens, a few hundred yards from the house. Count 2 involved her walking to the convenience store, a few hundred feet, and within sight of her house. The remaining four counts involved my mother standing directly in front of her own house. I was charged with elderly neglect for each occasion. I was literally sentenced to five years in prison, because my mother was standing on the sidewalk, right in front of her own house. There was no testimony or evidence presented that my mother was harmed in any way.”

Vose told the ABA Journal he felt the prosecution was motivated by personal animus against him, and said he has initiated complaints in both Rhode Island and Massachusetts against attorneys and police who were involved. Vose had sued the city of Pawtucket, Rhode Island, in federal court for allegedly violating his rights for falsely arresting and maliciously prosecuting him on the neglect charges.

The suit said Vose’s mother wanted her independence and had repeatedly refused to live in a nursing home, according to previous coverage by the Providence Journal. She also resisted care at home, verbally abusing one worker and ejecting her from the house, according to the amended suit.

When Vose’s mother was finally placed in a nursing home, she was expelled from two of them because of her behavior, according to the suit. The first nursing home deemed her to be a safety risk after she tried to jump the fence. The second refused to keep Vose’s mother after she pulled a fire alarm, which caused the home’s magnetic doors to open, allowing Vose’s mother and other residents to escape.

Now, Vose’s mother is in state-sponsored care, a situation that Vose described in an email to the Providence Journal as “state-sponsored kidnapping.” He said his mother has been medicated and kept in a urine-soaked diaper.

A federal judge tossed Vose’s federal claims last year because a court win on his civil rights claims would imply the invalidity of his conviction.

The court said it had no jurisdiction, and Vose’s remaining claims should be litigated in state court.

Updated on Sept. 1 to include comments from Carlton Vose.