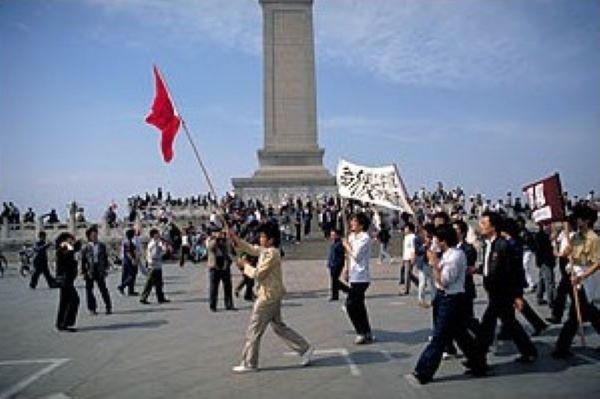 Lawyer Li Jinjin had been jailed for 22 months in China after he participated in the 1989 Tiananmen Square protests. Photo by Jiří Tondl, CC BY-SA 4.0, via Wikimedia Commons.

A former Chinese dissident who became a New York immigration lawyer was fatally stabbed in his law office Monday allegedly by a would-be client.

A photo from the New York Daily News of Li in front of his law office sign indicates that he went by the name Jim Li.

Police charged Xiaoning Zhang, 25, with the murder, according to the AP. Li’s friends told the New York Daily News that the woman had been at Li’s law office the week before and was disruptive. She was angry because Li wouldn’t take her case, the friends said.

Chuang Chuang Chen, the CEO of the China Democracy Party, told the New York Daily News that the alleged attacker came to the United States in August on a student visa. Instead of attending school, she came to New York and applied for asylum.

The woman had claimed that she was raped by police in Beijing and taken to a mental facility, Chen said.

Li sought asylum in the United States in 1993. He had been jailed for 22 months in China after he participated in the 1989 Tiananmen Square protests. He was studying law at Peking University at the time and acted as a union counsel, said Li’s best friend, Wei (Wayne) Zhu, in an interview with the New York Daily News.

Li “was one of the best men I have ever known,” Zhu told the New York Daily News. “He wanted to realize democracy in China. He will never realize that dream.”