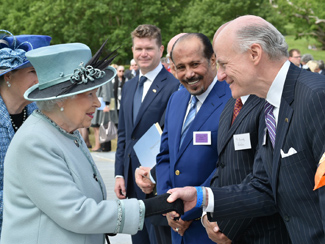 Clarified: With much honor and ceremonial display, the Magna Carta celebrated its 800th birthday on Monday on the same hallowed ground where King John originally sealed it.

Dignitaries from around the world met at historic Runnymede, England, to celebrate the Magna Carta’s worldwide impact while promising to rededicate themselves to the ideals and principles contained in, and inspired by, the famed legal document. Among those in attendance at ceremonies before the rededication were Queen Elizabeth II; members of the royal family including Prince Philip, Princess Ann and Prince William, Duke of Cambridge; Archbishop of Canterbury Justin Welby; and U.K. Prime Minister David Cameron. Speakers at the rededication included U.S. Attorney General Loretta Lynch and American Bar Association President William Hubbard. 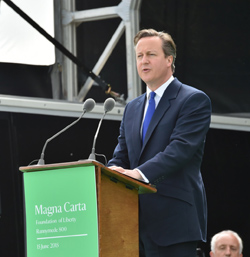 “Magna Carta has advanced important human rights through centuries, and throughout democracies all around the world,” Hubbard said in his speech (PDF) during the rededication ceremony of the ABA Magna Carta monument. “The barons and King John could scarcely imagine when they stood in this meadow 800 years ago that the words to which they agreed would launch the progression of the rule of law.”

Cameron noted in his remarks that the Magna Carta’s influence continues to inspire people around the world.

“What happened in these meadows eight centuries ago is as relevant today as it was then,” Cameron said. “All over the world people are still struggling to live by the rule of law, and to see their governments subject to those laws. The countries that have these things tend to be the long-term successes. Those that don’t tend to be the long-term failures.” Three of those successes, according to Cameron, have been the United States, India and South Africa, all former British colonies or dominions.

Cameron also alluded to an ongoing political struggle in the U.K. over his plan to replace the European Human Rights Act with Britain’s own bill of rights. 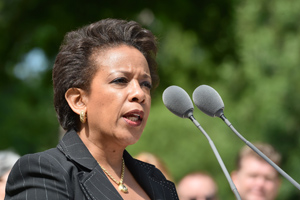 Lynch addressed ongoing efforts to improve relations between law enforcement and racial minorities during her speech. “We are engaged in initiatives to promote trust and understanding between law enforcement officers and the communities we serve,” said Lynch. “We are working with partners in the United States and around the world to pursue those who would deny human dignity, whether through trafficking or corruption, violence or terrorism. And we are carrying out a historic reorientation of our criminal justice practices to end an over-reliance on incarceration. At every turn, we are driven by that same devotion to the rule of law whose seeds took root in this field so long ago.”

Indeed, the need to keep the spirit of the Magna Carta alive for future generations was evident by the choices for entertainment during the four-hour-plus event. Educating future generations about the rule of law was a strong theme, and students ranging from elementary school to college got their chance to make their mark on the celebration. Students from nearby schools in Surrey, England, took part in performances and ceremonies while members of the Royal Holloway, University of London Symphony Orchestra got to play alongside members of the London Philharmonic Orchestra.

“On this historical day, let us pledge to keep those principles alight, let us keep Magna Carta alive,” Cameron said. “Because as those barons showed all those years ago, what we do today will shape the world for many, many years to come.”

• See what people are saying about the events in our social media roundup, and follow along with our full coverage of the ABA London Sessions.

Updated at 1:55 p.m. clarify that Prime Minister David Cameron spoke at a ceremony before the rededication.