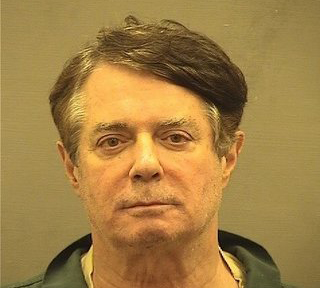 First, he was sentenced to an additional 3½ years in prison in a federal conspiracy case. When combined with a prior federal sentence he received for bank and tax fraud, his total sentence will amount to 7½ years in prison, report the New York Times, Politico, the National Law Journal and the Washington Post.

Second, he was charged in New York state with residential mortgage fraud and related felonies, according to the New York Times and a press release.

President Donald Trump’s pardon power would not extend to any state convictions. Manafort is a former campaign chairman for Trump.

The 16-count state indictment alleges that Manafort presented and prepared falsified records to obtain millions of dollars in mortgage loans.

Manafort was in federal district court in Washington, D.C., on Wednesday for his sentencing by U.S. District Judge Amy Berman Jackson. She sentenced Manafort to about six years in prison, but 30 months of the sentence will run concurrently with the 47-month federal sentence he received for tax and bank fraud from U.S. District Judge T.S. Ellis of the Eastern District of Virginia.

Manafort’s Wednesday sentence was for conspiracy charges related to his work as an unregistered agent for the government of Ukraine and for an attempt to influence witness testimony. Prosecutors said Manafort’s work had generated more than $60 million in income, and that he used offshore accounts to dodge more than $15 million in taxes.

“I am sorry for what I have done and for all the activities that have gotten us here today,” Manafort told Jackson. His lawyer, Kevin Downing, also said his client was remorseful.

But Downing added a qualifier. “But for a short stint as campaign manager in a presidential election, I don’t think we would be here today. I think the court should consider that, too,” he said.

Jackson appeared unmoved. “Saying ‘I’m sorry I got caught’ is not an inspiring call for leniency,” she said.

The new indictment in New York state likely will be challenged on double jeopardy grounds because the mortgage loans were part of the basis for Manafort’s bank fraud conviction in the Virginia case, according to the New York Times. New York law provides stronger double jeopardy protections than the U.S. Constitution.