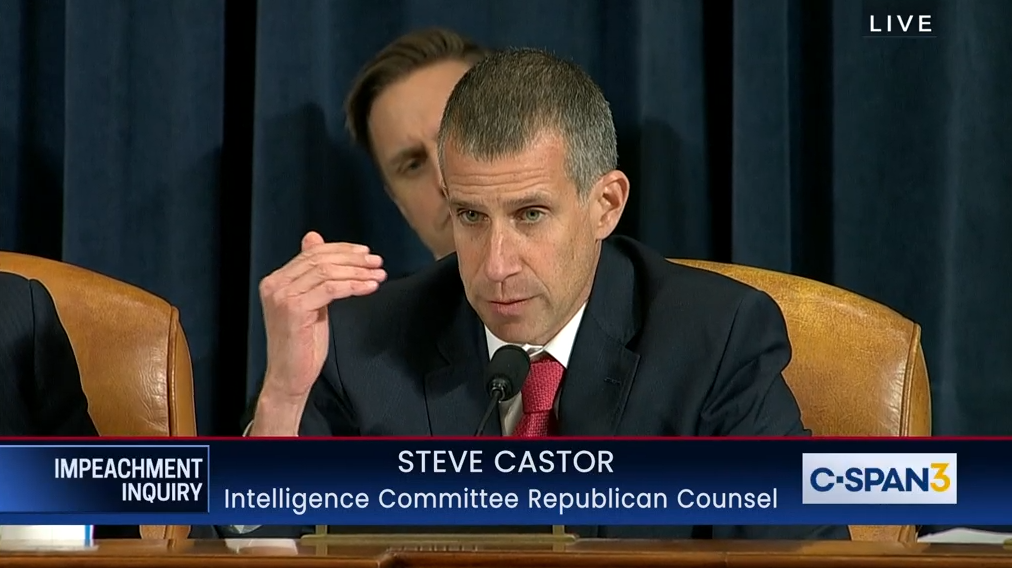 GOP lawyer Stephen Castor is getting some attention for his facial expressions and demeanor at the impeachment hearings of President Donald Trump, where he is questioning witnesses.

SFGate calls Castor a “sideshow of entertainment” for his skeptical facial expressions and posture that signals he is ready for a nap. Twitter pundits are jumping on his assertion that involving the U.S. ambassador to the European Union in Ukraine policy “might be irregular, but it’s certainly not outlandish.”

“ ‘Not as outlandish as it could be’ could be the title of a book about the last few years,” tweeted Jonah Goldberg, editor-in-chief at the Dispatch.

Castor, general counsel for the Republican minority on the House Oversight and Reform Committee, has had some experience questioning witnesses, report the Washington Post, the Daily Beast and Fox News.

He participated in questioning about the Benghazi attacks, IRS scrutiny of conservative groups, a botched gun-running probe, and the government’s response to Hurricane Katrina.

Castor has avoided media appearances as he climbed the ranks over nearly 15 years to become the oversight committee’s top GOP lawyer, according to the Washington Post.

His colleagues and supervisors described him in interviews with the Washington Post as an introverted straight shooter and “a fairly unassuming guy.” His questioning during the closed-door hearings showed him to be methodical and persistent. He is willing to ask the same question multiple times.

According to the Daily Beat, Castor has “shown a flair for lines of questioning likely to please the president and his supporters.” He has asked questions about the Ukrainian gas company that paid former Vice President Joe Biden’s son to be a board member, the issue that Trump raised in his July 25 phone call with Ukrainian President Volodymyr Zelensky.

Others said Castor did not seem particularly ideological.

“I know he’s a good family man. I know he loves his dog,” Republican Rep. Darrell Issa of California told the Washington Post. “If he has an ideology or a political bent, we haven’t seen it.”

Similarly, a senior GOP congressional aide described Castor to the Daily Beast as “a lawyer’s lawyer” who “didn’t come to Capitol Hill to get famous.”

Before joining the oversight committee, Castor was a commercial litigator at the law firm Blank Rome in its Philadelphia and Washington, D.C., offices. He is a graduate of George Washington University’s law school, according to his bio on the conservative Federalist Society.