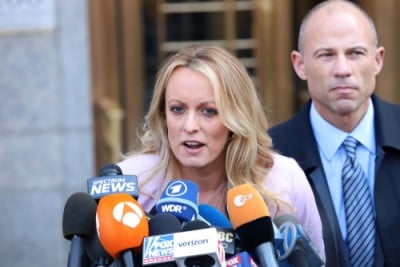 Stormy Daniels and Michael Avenatti in April 2018. Photo by JStone/Shutterstock.com.

Lawyer Michael Avenatti has been charged with stealing from adult film actress Stormy Daniels, the client he represented in a bid to invalidate her confidentiality agreement with President Donald Trump.

Avenatti is accused of diverting to his own client trust account nearly $300,000 of an advance due to Daniels, whose legal name is Stephanie Clifford, for a book deal that he helped negotiate on her behalf. Avenatti obtained the money by sending a fraudulent letter with a fake signature for Daniels to her literary agent, according to allegations in a press release and the indictment.

Avenatti used the money for airfare, hotels, car services, restaurants and meal delivery, online retailers, a lease payment on his Ferrari, payroll for his law firm and another business that he owned, and insurance, according to prosecutors.

After Daniels complained about not receiving the money, Avenatti lied and said he was trying to obtain the payment, prosecutors say. He then used funds received from another source to pay Daniels half the money.

Avenatti is charged with wire fraud and aggravated identity theft.

He also was indicted on previously announced extortion charges for allegedly trying to extort millions of dollars from Nike in exchange for his silence on what he claimed to be damaging information.

Avenatti also has been indicted in Los Angeles based on accusations that he stole millions of dollars from five other clients, including a former inmate who was paralyzed after he jumped from the upper floor of a jail.

Avenatti has denied all the allegations. On Twitter, he wrote that his agreement with Daniels included a percentage of her book proceeds.

“No monies relating to Ms. Daniels were ever misappropriated or mishandled,” he tweeted. “She received millions of dollars worth of legal services and we spent huge sums in expenses. She directly paid only $100.00 for all that she received. I look forward to a jury hearing the evidence.”