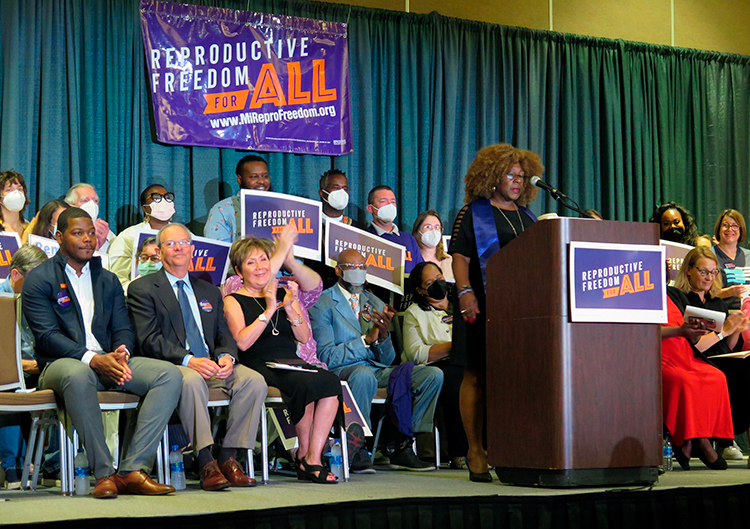 The Reproductive Freedom For All group gathered more than 750,000 signatures in favor of placing on the ballot a state constitutional amendment protecting abortion rights. (AP Photo/Joey Cappelletti)

The Michigan Supreme Court said Thursday voters can decide whether to enshrine the right to abortion in the state constitution, rejecting a challenge that a ballot proposal was defective because of typographical errors.

In a 23-page order, the court in Lansing, Michigan, directed a deadlocked Board of State Canvassers to certify a petition by the abortion rights group Reproductive Freedom For All to place a proposed amendment to the state constitution on the November ballot.

The court found the meaning of the words in the proposed amendment was not changed by a lack of space between certain words and that it “fulfilled all statutory form requirements and the board thus has a clear legal duty to certify the petition.”

The order means that voters could help determine the future of abortion in the state. Earlier this week, Michigan judge Elizabeth L. Gleicher ruled that a dormant 1931 law banning abortion is unconstitutional under Michigan law and blocked it, according to the Associated Press. The New York Times, Washington Post, and NBC News have more.

In a concurrence, Chief Justice Bridget M. McCormack noted that nearly 754,000 people had signed the petition, many more than were required.

Those who challenged the proposal had “not produced a single signer who claims to have been confused by the limited-spacing sections in the full text portion of the proposal,” McCormack noted.

McCormack called it a “game of gotcha gone very bad” and a “sad marker of the times.”

However, in a dissent, Justice David F. Viviano argued the case “raises a rather prosaic question with momentous consequences: Do spaces between words matter?”

He argued that the text in the petition “failed to include the spaces that would appear in the amended constitution.”

“The lack of critical word spaces renders the remaining text much more difficult to read and comprehend, and therefore something less than the ‘full text’ required by the constitution and statutes,” Viviano wrote.