More Zoom issues in court hearings: Doc joins from operating room, defendant is naked from at least the waist up 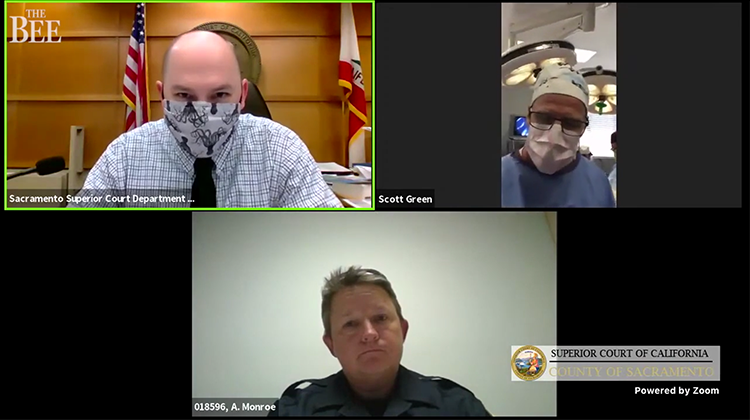 Dr. Scott Green joined a Zoom hearing from an operating room. Image from video hosted by the Sacramento Bee.

Zoom court hearings continue to produce some unusual videos of participants who ignore decorum or carry on with activities they wouldn’t try in a courtroom.

In California, a traffic court defendant, Dr. Scott Green, appeared for a hearing dressed in scrubs in the operating room. A person was on the operating table, report the Sacramento Bee, NBC and the New York Times.

The Sacramento court commissioner, Gary Link, questioned Green about what he was seeing on the video. “Unless I’m mistaken, I’m seeing a defendant that’s in the middle of an operating room appearing to be actively engaged in providing services to a patient,” Link said. “Is that correct, Mr. Green? Or should I say Dr. Green?”

Green, a plastic surgeon, said he could proceed with the hearing because a second doctor was in the operating who could do the surgery.

“I’m concerned about the welfare of the patient based on what I’m seeing,” said Link, who assigned Green a new court date.

NBC asked Green about the episode, first reported by the Sacramento Bee. Green said the newspaper report is “not accurate and I have nothing to say. Thank you.”

The Medical Board of California is investigating.

Meanwhile, the County County, Illinois, Sheriff’s office is investigating video of two people who appeared to be having sex during a court hearing in the Chicago suburb of Maywood, the Chicago Tribune reports. It is unclear whether the people were defendants or bystanders, according to the Tribune.

And in Michigan, Judge Joseph Sheeran of Bay County encountered a child support defendant who appears unclothed on the top half of his body, from a little below the waist (beginning at 2:30 into the video). MLive.com has coverage.

“You’re, you’re naked,” Sheeran remarked. The camera does not capture whether he the man is completely naked. Sheeran told the man he would give him the opportunity to go put some clothes on. The man, who was charged with failure to pay child support, agreed.

Sheeran told MLive.com he did not hold the defendant in contempt of penalize him for being in a state of undress. “Occasionally, I have to tell people to dress appropriately for court, but I’ve never had to tell anyone to get dressed for court,” Sheeran said.