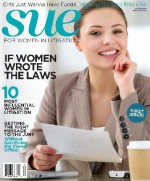 A new magazine focused on women lawyers and their practices “Sue: For Women in Litigation” is set to debut in January.

The legal tabloid Above the Law first blogged about the magazine in August when it got hold of some of the publication’s early focus group data. Back then, the magazine was toying with names. ATL devised a poll in which it asked its readers to vote on which proposed name was worst. “Trial Mama” won the reader poll.

But in the comments section of the post, one reader wrote in a suggestion, “Sue.”

Turns out Chere Estrin, a paralegal administrator turned law firm staffing entrepreneur, was also reading. And she was inspired by anonymous commenter No. 33.

Estrin says the ATL attention, while embarrassing, turned out to be a valuable source of feedback.

Estrin hopes the magazine, which is set to come out six times a year in print and PDF downloadable format for a $49 annual subscription, serves a niche audience.

The inaugural issue features a cover story written by Loyola Law School Professor Laurie L. Levenson. She’s writing about what the world would look like if women wrote the laws.

Levenson was mulling the topic for an article when she got the writing invite from Estrin, who also authors the paralegal blog The Estrin Report.

And even though Levenson doesn’t know much about the publication, she agreed to do the piece gratis to support an effort that she hopes will give women more of a voice in the legal profession.

All the authors in the magazine are volunteering their time, as Estrin says the operation is simply too small to pay at this point.

“We’re a small company,” she says. “Either they’re willing to join us in our effort, or thank you very much.”

According to Sue’s site, the publication will be bimonthly magazine devoted to “demolishing stereotypes” and “acknowledging strengths.”

This is the second publication by Estrin, who launched “Know: A Magazine for Paralegals” this summer.

Estrin says it was the success of Know that pushed her to launch Sue.

“We really saw a need for [a magazine for] women on issues that are not necessarily tackled by traditional publications,” she says.

Updated at 3 p.m. to add comments from Estrin.