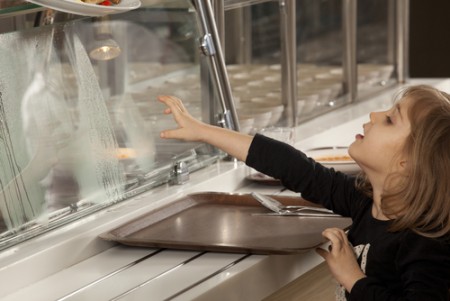 The bill, thought to be the first of its kind, requires schools to work with parents to pay their bills or to help the parents apply for federal meal assistance, the New York Times reports. Martinez signed the bill last Thursday.

The bill bars schools from requiring students to throw away their food after it has been served because of an inability to pay. It also bars stigmatizing practices, such as requiring students who can’t pay to wear a wristband or to complete chores to pay for meals.

The bill, the Hunger-Free Students’ Bill of Rights Act, doesn’t stop schools from penalizing students for nonpayment by withholding a transcript, for example, or by revoking parking passes. Nor does the bill bar districts from hiring collection agencies to pursue unpaid balances. It does, however, say schools can’t require parents to pay fees or costs from the agency hired to collect.

State Senator Michael Padilla, a Democrat from Albuquerque, told the Times he introduced the bill because he encountered such tactics when he was in foster care as a child.

“I made Mrs. Ortiz and Mrs. Jackson, our school lunch ladies, my best friends,” he said. “Thank goodness they took care of me, but I had to do other things, like mop the floor in the cafeteria. It was really noticeable that I was one of the poor kids in the school.”