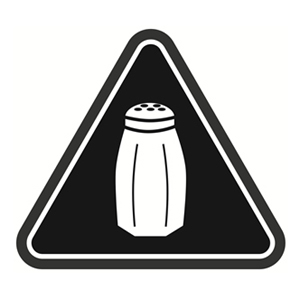 New York City is being sued over a new rule requiring chain restaurants to put salt-shaker icons on menu items that contain high levels of salt.

It also says the rule violates restaurateurs’ free speech rights by forcing them to post salt warnings based on what they contend is a “scientifically controversial opinion.”

The city’s law department said it would review the allegations but is confident the board of health has the authority to enact such a rule.

Public health experts say the warning will help consumers understand how salty some fast food items are. They say that a high-salt diet can lead to high blood pressure and other health problems.

But salt producers contend that the new rule is misguided.

The high-salt warning, which will be required on foods that exceed the recommended daily sodium limit of 2,300 milligrams, will apply to about 10 percent of the menu items of chain restaurants with at least 15 outlets nationwide, which account for about one third of the city’s restaurant business, according to the board of health.